Field testing of the Mitas PneuTrac concept in Europe are showing it offers a larger footprint and better tractive force compared to standard and IF agricultural tires. 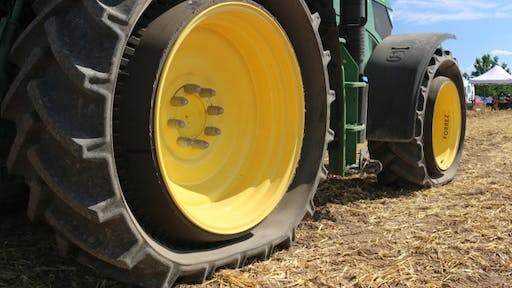 The initial results from the Mitas PneuTrac concept field tests show the clear advantages of its larger footprint and better tractive force over standard, as well as IF agricultural tires. The footprint of the 600/65 R38 and 480/85R28 PneuTrac is significantly larger than a standard tire and VF-rated tire. Mitas is conducting field tests in Europe with a John Deere 6150R tractor mounted with 480/65 R28 PneuTrac on the front axle and 600/65 R38 PneuTrac on the rear.

“The results of the first field tests that are under way in Europe give us a good feel for continuing the successful development of the Mitas PneuTrac concept,” says Andrew Mabin, Mitas’ Sales and Marketing Director. “Mitas PneuTrac is not yet commercially available, and we still have some way to go with the R&D development before releasing it but we are getting closer to a clearer release date being available.”

“The field tests have so far demonstrated the clear advantages of PneuTrac over conventional tire designs and confirmed previously released lab test results. The most important PneuTrac benefits are a larger footprint, greater tractive force and also higher lateral stability at a lower inflation pressure when compared with the standard tire,” Mabin adds.

Mitas is developing its PneuTrac concept with its partner, Galileo Wheel Ltd. Mitas and Galileo had intensively worked for four years to build the PneuTrac concept from an idea to lab testing and finally to the field demonstration. The award-winning tire concept had its public premiere in 2013 at the Agritechnica fair in Germany, where Mitas presented 280/70 R18 PneuTrac and 600/65 R38 PneuTrac. At the SIMA fair in Paris in February 2015, Mitas presented the 480/65 R28 PneuTrac, which was the third size of the revolutionary concept.