At Farm Progress Show 2015, Michelin introduced four new tires for tractor, sprayer and harvesting equipment, as well as the Michelin Pressure Calculator app capable of determining the most appropriate tire pressure for an application. 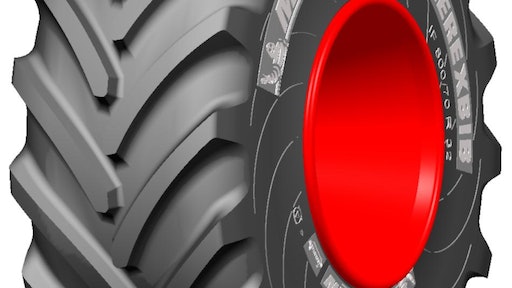 MICHELIN Agricultural tires is launching four new tires for tractors, sprayers, harvesting equipment and large implements in North America, as well as an industry-first satisfaction guarantee on the well-known Ultraflex line and a new mobile app that calculates the proper air pressure for tractor tires. Also on display during the Farm Progress show in Decatur, IL, will be an example of both of Michelin’s current VF tractor tires.

All six tire models, each with a unique tread design, feature Michelin Ultraflex Technology, which enables tires to operate at up to 40% lower air pressure compared to standard radial tires, resulting in a larger footprint for reduced soil compaction and higher yields. A recent Harper Adams University study demonstrated a 4% yield increase with Ultraflex tires compared to standard radial tires.

The expanded line-up of MICHELIN farm tires include:

The current MICHELIN VF tractor tires on display include:

Standing behind the Ultraflex tire lineup, Michelin is also announcing an industry-first full-year farmer satisfaction guarantee for the purchase of any Ultraflex tire. Farmers can try Michelin Ultraflex replacement tires risk-free for a whole year and return the tires for a refund if they are not satisfied.

Michelin is offering farmers access to an easy-to-use mobile application that features a number of unique functionalities. With the Michelin pressure calculator, real-time agricultural tire pressure information is just a photo and a couple of clicks away.

The Michelin Pressure Calculator can instantly work out the most appropriate tire pressure for the desired load and speed. This gives farmers the best pressure information possible to help them maintain road safety as well as protect the soil. The app is free on both Android and iOS devices and available in four languages: French, English, German and Spanish.