Titan Tire Reclamation Corp. has developed a solution to process giant scrap mining tires accumulating in Alberta's oil sands, transforming them into oil, steel and carbon black that can be used in new products. 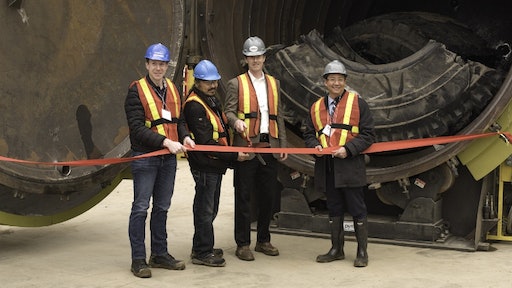 After years of research and development, TTRC has developed a unique environmental solution to process giant scrap mining tires that have been accumulating in Alberta's oil sands. Until now, the recycling of scrap industrial mining tires was not possible because of their size and density. The TTRC thermal reactors transform mining tires into oil, steel and carbon black solving one of the biggest environmental problems these mines face. TTRC came up with the solution using a process originally developed by Green Carbon. Titan partnered with ACDEN (part of the Athabasca Chipewyan First Nation), Paul Newton, Green Carbon and Suncor to bring this to the oil sands. At full production, the company estimates on a daily basis this operation is capable of converting 240,000 lbs. of scrap tires to approximately 13,600 gal. of oil, 52,800 lbs. of steel and 76,800 lbs. of carbon black. These recycled items will be placed back into new products. The system uses 85% of the gas it generates to heat up the vessel containing the scrap tires.

All four of Canada's major mines were represented at the opening with several of the mine contractors also present. Attendees were able to tour the facility and view Titan's wheels, tires and undercarriage products, as well as learn more about its mining services.

Chief Allen Adam of the Athabasca Chipewyan First Nation (ACFN) was also in attendance, showing the First Nation's support of the new technology and its partnership with TTRC. At the event, he noted the importance of protecting the environment and the economic benefit of doing so stating that reclamation is a big part of the future of this region.

The technology is also providing jobs. TTRC currently has 15 people working at the facility and the number could expand to as many as 40 employees. TTRC will be testing and developing the system and in doing so, will ramp up the entire system in an orderly manner over the next several weeks.

At the opening, Titan International Chairman and CEO Maurice Taylor shared the company's plans to expand the TTRC operations to Chile and Australia, as well as Alberta. "This system is not just the only one of its kind in the Canadian industry, it's the first of its kind in the world," stated Taylor. "This venture has taken over seven years to complete from the day Titan first met with Shell Oil, but it's been two years to get it here today with Suncor. I want to thank everyone who has worked on this project and for what they have done to make this new chapter at Titan successful."