SKF recently completed construction of the 3,000 tonne concrete foundation for its new large size bearing test center which will enable the company to better conduct real-world testing of its products. 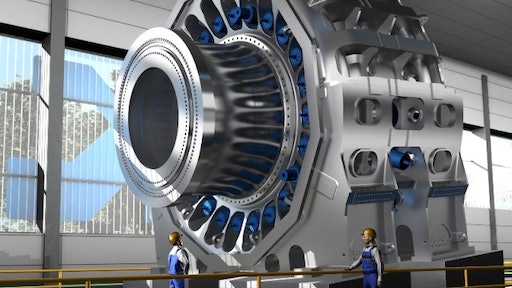 SKF is currently building the world's most powerful large size bearing test center on its Schweinfurt 'Werk 3' site. This pioneering project is now one major step nearer completion – weighing in at around 3,000 tonnes, it took just two days to cast the foundations for the larger of the two new test rigs.

Around 9 m wide, 6 m deep and 22 mm long, the pit that had to be filled for the base of the future SKF test rig was the size of two detached houses. It had to be filled quickly to ensure the concrete could set correctly.

Over the course of 19 hours, 150 mixer trucks brought in their load and discharged it in the pit, practically one vehicle every 6 minutes, so almost as if on a conveyor belt. "Obviously this was a logistical challenge," says Armin Schaab of SKF’s Construction and Factory Planning team, "but quite clearly our detailed advance planning paid dividends. In addition, the entire team put in a magnificent effort on site, with everything running like clockwork and no incidents of note. This meant we were able to cast the 1,200 cu. m as planned."

The base is such a huge block because of the enormous forces likely to be unleashed by the test rig that will be anchored to it. The colossus among test rigs is intended in particular for the testing of gigantic rolling bearings for wind power. "It will be the first test rig in the world capable of testing not just a single main bearing but a complete bearing unit all at once," says SKF's Senior Vice President, Technology Development Bernd Stephan, hinting at the dimensions of this unique installation. "The bearings themselves can have an external diameter of anything up to 6 m, being intended for turbines in the 10 megawatt class. The test rig can subject structures of that kind to dynamic forces in all directions that, when combined, are many times greater than on the strongest test installation currently available."

Quite apart from that, the future test rig will also allow rotational speeds on testing that will be considerably higher than currently available. Using these exceptional capabilities, SKF wants to simulate extreme dynamic loads of the order of several meganewtons or meganewton metres in as realistic a manner as possible. In view of power capacity of this order, the engineers from RENK Test System GmbH, the firm entrusted with the development, had to come up with a special fixing method that would direct the forces exerted on the station in a controlled manner along the correct paths.

"We are making these efforts because the existing computational simulation models simply aren’t capable of making truly realistic prognoses," says Dr. Martin Göbel, Manager of the test center project at SKF in Schweinfurt. "Our two new test rigs will provide a remedy in this respect and give us insights into processes that were previously inaccessible. The relevant findings will make the new test center a pioneering instrument in helping many customers from a wide variety of industries gain access to an energy-efficient future in a way that is tailored to the application in question."

"In the final analysis, the 360 MSEK investment in the new test center will help us customize large size bearings to their subsequent uses much more precisely and efficiently than has previously been possible," says Manfred E. Neubert, President of SKF GmbH. "This means that our customers benefit from significantly higher levels of robustness and reliability in the new generation of large size bearings." For SKF itself, the new test center is like one of those final pieces in a puzzle soon to be completed, adding to the expertise in large size bearings already available on the Schweinfurt site.