Dana announced at INTERMAT 2018 its HVT platform is prepared for Stage V emissions standards and it is collaborating with engine manufacturers to develop transmission control software to deliver a compliant system solution. 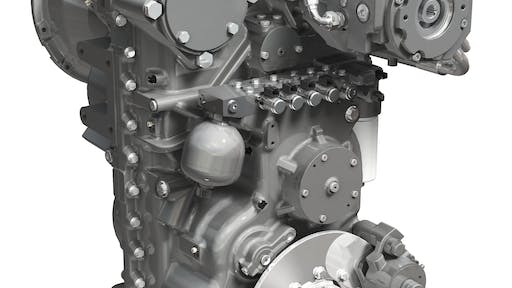 Set by the European Union, these diesel engine standards further restrict emissions limits for non-road mobile machinery, including vehicles for construction, material handling, and agriculture applications. In 2019, the regulations will go into effect for engines below 56 kW (75 hp) and above 130 kW (174 hp). Required compliance for engines in the 56-130 kW (75-174 hp) range will begin in 2020.

"Original equipment manufacturers are looking to Tier One suppliers with efficiency-focused technologies to stay ahead of tightening emissions regulations for all vehicle categories in markets around the world," says Bernd Schmidt, General Manager of Dana Rexroth Transmission Systems. "Our hydromechanical variable transmission (HVT) platform is already prepared for Stage V emissions standards, and we are collaborating with leading engine manufacturers to develop transmission control software that will allow us to deliver a fully compliant solution."

A product of the joint venture between Dana Incorporated and Bosch Rexroth, HVTs from Dana Rexroth significantly reduce fuel consumption by decreasing engine speeds throughout the duty cycle and also at idle, when speeds can drop to as low as 600 rpm. Application analysis demonstrates the possibility of further savings without compromising performance through engine downsizing.

The long-drop version of the highly efficient Dana Rexroth HVT2 has been in production for reach stacker applications since 2015, supporting power outputs from 135-210 kW (180-282 hp). Software upgrades are planned for later this year, including new driving modes designed to improve functionality and driver comfort.

The long-drop version of the HVT2 is featured on Kalmar's Gloria generation of reach stackers as part of the Kalmar K-Motion drivetrain.  Developed in association with engine manufacturer Volvo Penta, the Kalmar K- Motion drivetrain system for 45-ton Gloria reachstackers equipped with the HVT2 can reduce fuel consumption by up to 40%.

Dana Rexroth announced in January 2018 that the long-drop version of the HVT2 is now available to OEMs for pre-production testing on motor grader applications.

In addition, an enhanced model of the HVT2 supports engine ratings up to 235 kW (315 hp) for applications with high power takeoff torque requirements such as empty container handlers, reach stackers, and other material-handling applications.

Dana Rexroth also offers a short-drop version of the HVT2 that features a modular configuration with a redesigned transmission case to reduce the input/output distance. Now available for pre-production testing by OEMs, this transmission can be adapted for a variety of vehicles, including forklift trucks, empty container handlers, and terminal tractors.