The multinational tire company is looking to not only expand its product offerings, but explore new technologies and materials to deliver unique solutions to OTR tire customers. 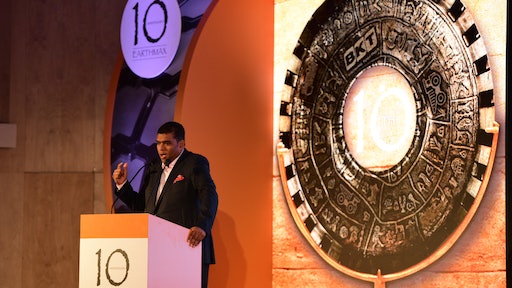 As part of the 10th anniversary celebration of the Earthmax radial tire lineup, Rajiv Poddar, joint managing director of BKT, set forth the company’s long-term objectives for the global off-highway tire (OTR) market. BKT is striving for a 3% market share in the global OTR tire segment by 2020 and 4% by 2025, with a long-term goal of 10% global share.

The Indian-based multinational tire company already has a substantial presence in the agricultural and industrial tire sectors and has seen ongoing success since entering the OTR sector in 2008 with its Earthmax line. The lineup has since grown to 25 models in several sizes and versions for wheel loaders, graders, articulated dump trucks, rigid haulers and other off-highway equipment used in the construction, quarry and mining applications.

The company moved into the OTR radial segment after identifying a gap in the industry. As Poddar explained, BKT saw two distinct segments: high-standard/premium brands which dominated the market, and low-standard/low-cost brands of questionable quality.

“There was a group of users whose needs in terms of quality and competitiveness had not been… by the players at that time,” he commented. “BKT focused all of its efforts in that gap between the low- and the high-range products.”

The first Earthmax tire cured“When we decided to enter the OTR radial segment, we knew there were significant technological challenges we were ready to face,” said Poddar. The company chose to start with the “less demanding” wheel loader tire. Yet, even these tires had specific challenges that must be addressed, including heavy loads, high pressure, cut and chip resistance and safety.

After significant investment in the equipment, experienced staff and R&D, BKT’s first EarthMax all-steel radial loader tire was introduced in 2008. “Then we graduated from that to the articulated dump truck, which is moving at a [higher] speed and for a longer distance,” said Dilip Vaidya, president and director of technology for BKT. “When we went to that, we had to change all of the [compounds], because as the speed increases, there is more heat generated in the tire.”

BKT has since developed a variety of different OTR radial patterns and sizes for specific applications or environmental conditions, such as snow, aggregates, mud and earth, rock, recycling or underground mining. It now offers OTR models from smaller sizes for loaders, tires for rigid dumpers and the Giant segment.

“The major challenge in Giant tire development compared to previous production is the high speed with extraordinarily heavy loads over long distances, in addition to extreme lateral forces provoking mechanical stress on belt edges,” said Vaidya. “Coping with these challenges, we have reached a stage of advanced engineering in which the analysis of the entire tire structure and all features is essential.”

Preview of the BKT Earthmax SR 46 33.00 R51, which will be launched in Q2 2019.“A new R&D center was built for the purpose of researching and developing new polymers and tread compounds by means of sustainable materials and innovative designs for the manufacturing processes,” Poddar stated. “Thanks to the in-depth research and testing facility, the development of highly technological and innovative products such as giant OTR radial tires was now within our reach...”

The company introduced its first all-steel Giant OTR tire in 2016 with the Earthmax SR 45 Plus. Other sizes followed in 2016 and 2017, and the company has now announced plans to bring 51- and 57-in. sizes to market to complete the range.

“After the development of the 27.00 R49 size in three different patterns, namely Earthmax SR 45 Plus, SR 46 and SR 48, we had the opportunity to study the effects of tread design features on tire performance, taking into consideration heat development, heat dissipation and wear characteristics,” said Vaidya. “This knowledge will be applied for designing optimized tread patterns for 51- and 57-in. sizes, which are expected to be released in the second quarter 2019 and the second quarter 2020, respectively.”

“It is our aim to observe and understand the users’ specific jobs, the type of terrain on which they operate, the type of loads and temperatures required, the operating conditions and the particular challenges for the job [in order to provide] effective solutions to the end users,” said Poddar. “And when I say solutions, I don’t only mean tires.”

Dilip Vaidya, president and director of technologyMining involves some of the most rugged conditions equipment, and tires, can encounter. “In these rocky, abrasive and harsh environments, tires are exposed to extreme mechanical stress and fatigue, to extremely heavy loads at the toughest handling and transport conditions. In addition, extraction is moving to always greater depths,” said Vaidya. “That is why BKT has introduced automated equipment and monitoring tools to enhance performance and productivity on the one hand, and to reduce the miner’s exposure to hazards.”

Developed in house, the SPOTech (Satellite Performance Optimization Technology) monitoring system is designed to measure parameters such as average/maximum speed, cycle times, lateral/vertical/longitudinal forces, percent grade and other data that can be used to optimize haul road construction and troubleshoot tire operation issues such as irregular wear, belt edge separations and heat buildup.

SPOTech collects data that can be used to help optimize haul road construction and troubleshoot tire operation issues.“The system incorporates an ‘accelerometer’ in the data logger, which is placed on a level part of the dump truck, recording latitudinal, longitudinal and vertical motion and forces involved in addition to speed, cycle times, and other parameters,” Vaidya explained. “A GoPro camera is mounted to capture videos from the operator’s perspective and synchronized with the data for a complete picture of the operation.”

More tools are in the R&D stage. For example, tire pressure measurement systems (TPMS) are currently fitted to the wheel of a tire. BKT is exploring other alternatives. “A possibility is that in future, we can try to fit that sensor inside the tire,” said Vaidya.

The sensor would be built into the tire structure. Once mounted onto the vehicle, the system could potentially allow use of a single monitor to track both vehicle and tire data. “We are working with one or two partners to develop a system where we can have complete fleet management – where we can follow the tire, the vehicle, the total running hours, the speed, all of the parameters,” said Vaidya. The only thing site management would have to enter are items such as remaining tread depth.

“[The data] can be utilized by the mines, as well as by us, to understand how the tire perform,” Vaidya indicated. “The TPMS is one of the important [components] to make sure the pressure is also controlled.”

While it shows promise, a final solution for such a system is still a couple years off, Vaidya added.

New Materials on the Horizon

Another area of research for BKT is sustainable materials for use as an alternative to traditional natural rubber and oil-based synthetics, both of which will become more difficult and costly to develop as reserves become depleted.

The company has entered into a joint research agreement with KULTEVAT Inc., a U.S. biotechnology company specializing in the cultivation and processing of TKS Dandelion as a renewable and sustainable alternative for natural rubber. “After a series of studies and experimentation, we will develop new compounding methods to be integrated in the tire manufacturing process, and TKS Rubber will gradually replace the use of natural rubber,” Vaidya stated.

Several samples are set to be delivered for lab research by October 2018, with a 1-metric-ton supply of stabilized TKS Rubber to be provided by October 2019. “In addition to lab optimization and manufacturing process trials on all of our tire ranges, we will also focus on compounding methods for the specific OTR segment,” said Vaidya.

Vaidya pointed out that rubber from TKS Dandelion has a higher molecular weight that will deliver better strength than existing natural rubber. “This is a major advantage that we feel is going to help us in the mining OTR sector, as well as agricultural,” he added.

Other major projects include development of high-performance compounds by means of nanomaterials or nanocomposites, graphene and other materials.

BKT also recently set up a carbon black manufacturing plant near its tire production site in Bhuj, India. “This plant enables us to better ensure raw material qualities and a greater variety of high-quality carbon black to be used for specific formulations during the compounding stage,” said Vaidya.

Such advances in materials will be essential as application demands begin to surpass existing OTR tire technology. Take autonomous vehicles, for example, which will have the ability to operate 24/7.

“[Tread design and compounds] will be important for the vehicles and also for the tires because rubber… is going to generate heat. Non-stop operation of these kinds of vehicles is going to be tough for [tire companies] to build a specific compound to manage heat buildup and wear characteristics,” Vaidya commented. “Whatever heat is generated has to be dissipated, so the [tread] design will also be important.”

While BKT continues to explore the next phases in tire development, such phases represent long-term opportunities. For now, the company is focused on more pressing projects.

“At the moment, our focus is on going up to 57 in. [OTR Giant tire]. That’s the next level, which is very important and is going to be launched in 2020,” said Vaidya.

As indicated, a 51-in. Giant will come out the first half of 2019, and Vaidya promises an all-new line of tracks is also on the horizon.