The second edition of Xtractor will travel through South Africa with BKT tires being used for all 50 stages of the expedition. 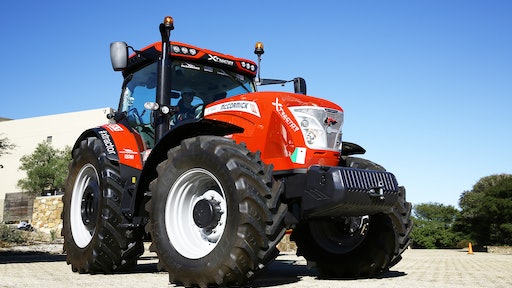 Agriculture, technology, solidarity – these are the key words perfectly reflecting and explaining BKT’s choice to sponsor this second expedition of Xtractor through South Africa, which departed April 4 from Cape Town. This sponsorship is in perfect harmony with the values of the Indian multinational group and a peerless opportunity to prove how tough and resistant are its tires. The expedition's latest-generation McCormick tractors are actually equipped with BKT tires for all 50 stages from Cape Town to the city of Pretoria among arduous trails and thrilling missions to be accomplished.

The patterns concerned are Agrimax Force IF 710/75 R 42 and Agrimax Force IF 650/65 R 34 for the McCormick X8 tractors and Agrimax RT 657 in sizes 650/65 R 42 and 540/65 R 30 for the McCormick X7 tractors. Thanks to acknowledged features such as adaptability to road and terrain, flexibility, traction and reliability - these tires are ready to face this exciting adventure among unspoiled natural reserves, amazing gold mines and the breathtaking African plateau offering maximum safety to the driver.

“BKT has chosen to be an official sponsor of X-TRACTOR AROUND THE WORLD since the very beginnings and its first edition in 2015 through Australia by equipping latest-generation farming tractors with high-performance tires that are strong and resistant, yet respecting the soil they move on,” states Lucia Salmaso, MD of BKT Europe. “We are glad and proud that we will be able to help the South African communities enhance the agricultural development and economy, making a contribution to their case. We will do our best for fostering and supporting this expedition under the sign of solidarity since both objectives and motives of this international event are fully in line with BKT’s philosophy.”

This second edition of Xtractor has a strong intrinsic humanitarian message – which is the reason why BKT has decided to join this venture in full awareness and sharing its values. A concrete example is given with the presence of Iya Traoré, the king of football freestyle and special guest at BKT’s main corporate events worldwide, who will be present at the official start of a project for building a new soccer pitch at Sedibeng West’s high school. The cooperation with the top athlete from Guinea started last year. Since then, BKT has been playing an active role in a charity project by providing the school of the IYA Foundation, operating in Traoré’s home country, with the material necessary to students, along with medical instruments and photovoltaic cells.

A clear focus on an actual giving back philosophy is well-reflected in the activities of the BKT Foundation committed to sustaining solidarity projects in favor of the Indian population, such as the full financing of the education for 800 girls in a school of Rajasthan.

Undoubtedly, an added value for Xtractor Around the World is the patronage of the Embassy of the Republic of South Africa in Rome assigning merit to ID-ENTITY, who conceived and produced the format also supported by McCormick, Amref International as well as the Commando Force Unit for the Protection of Forest, Environmental, and Agri-food Resources and the 1st Parachute Regiment “Tuscania”,  partners of BKT in this extraordinary experience.