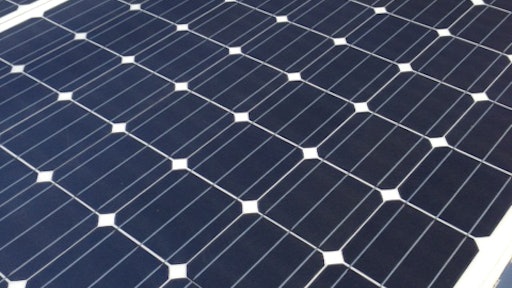 Just 30 years ago, the thought of using solar power to provide vehicle energy was not considered to be a viable option for the transportation industry. At the time it was mainly used on satellites out in space, and was so expensive only NASA and the military could afford to use it. “Back then a solar panel cost about 10 times more per watt than what [our product] costs, and would be 33% larger in size,” says Sean O’Connor, Sales Channel Manager for Go Power! (company information, 11336753).

However, various technology advancements over the years—including the development of lighter weight solar panels—have enabled solar power to become a reality for mobile applications through the creation of solar-based battery charging systems.

Solar panels affixed to the top of the vehicle collect the sun's energy. The Go Power! system uses a cable harness to direct the captured energy to the battery system, while a solar controller ensures the batteries do net get overcharged, which can cause damage. The stored energy can be used to power various systems on the vehicle such as safety lighting, lift gates and telematics systems.

Go Power!, and its parent company Carmanah, has been providing solar technologies for harsh environments, such as military and marine applications, since 1996. The company knew its technology could be used in almost any market, but its solar panels needed to be lighter, thinner, more durable and flexible in order to be used in applications such as the heavy-duty or work truck markets. To achieve this, Go Power! redesigned its rigid solar panel—typically composed of tempered glass and an aluminum frame—by combining all of its components into a flexible, UV-resistant polymer free of the yellowing and deterioration concerns of other plastics.

Introduced in early 2014, the Go Power! Solar Flex solar panels pair the plastic layer with high-efficiency solar cells that can bend without breaking (learn more, 11336763). Further flexibility is added by removing the aluminum frame to allow the Solar Flex panels (product information, 11336795) to bend up to 30 degrees. The flexibility makes them easier to install on various surfaces, including curved ones. According to O’Connor, removing the frame and tempered glass made the panel 82% lighter than standard tempered glass solar panels.

Jeffrey Flath, President and CEO of eNow Inc. (company information, 11230975), says the company's lightweight, semi-flexible solar panels (learn more, 10895574), in combination with the mounting system, weigh less than 0.6 pounds per square foot and are able to conform to roof contours, including roof fairings. In addition, the panels are less than 1/16th of an inch thick to provide low overhead clearance and wind drag. “The complete on-roof subsystem, including electrical junction box, is aerodynamically designed,” he adds.

Due to the reduced weight and durability of the solar panels now available, solar-based technology can be used in just about any mobile equipment application—everything from heavy-duty trucking to agriculture and military. “Basically any application where power is being drawn from a battery, our solution is designed to replenish that power,” says O’Connor.

Flath adds that eNow’s systems are adaptable to various transportation applications, and that the main limitation is the amount of flat space available on a vehicle for mounting the solar panel. He says that while eNow’s focus is currently on medium- and heavy-duty trucks, buses and military vehicles, it can create solutions for custom transportation applications, as well.

Both eNow and Go Power! will work closely with customers—both OEMs and aftermarket—to integrate their solar systems into a vehicle. O’Connor says many customers don’t know how large a load they are pulling from a battery, which is a significant determining factor for choosing the right solar system for an application. He says it’s also important to know where the vehicle will be used because of the varying amounts of sun exposure across North America and the world. “We size our solar system accordingly to make sure we can power vehicl systems wherever they are,” he explains. Working closely together with customers ensures the correct system is chosen for the application and its needs.

The use of solar-based systems for mobile applications can offer many benefits. First and foremost are the fuel and emissions savings realized by taking the power draw of vehicle systems off of the engine. And because solar systems are often used for power when the engine is off, engine idling is eliminated, allowing fleets to be compliant with anti-idle laws. O’Connor adds that these systems are also very quiet, reducing noise levels in the vehicle or at a work site, and require little maintenance other than having to occasionally wipe clean the solar panels.

In addition, even when the battery system is sitting idle, it can be charged by the solar panels. “Our Solar Flex system is designed to keep the batteries charged to 100% whether the vehicle’s running or not,” says O’Connor. He goes on to explain that many people do not realize there’s a discharge on a battery even as it sits idle due to the battery releasing energy and other electronic systems pulling power from the battery. This discharging can deplete the battery and cause the vehicle to be unable to start even if it has only been sitting idle for a couple of days. Using a solar-based charging system, however, will help extend the battery’s life by keeping it topped off with energy during day-time operation.

Besides absorbing energy from the sun, the eNow system can also receive power from other sources including the engine’s alternator, regenerative braking and shore power. “In certain situations such as night time or low light conditions, alternate power sources can augment our solar-based system to ensure the batteries are always charged,” explains Flath.

Despite the many benefits, Flath says the transportation industry’s hesitation to adopt new technology is one of the biggest challenges to bringing solar power to mobile applications. “People want to see proof that our technology works but are hesitant to be the ones to adopt the technology and prove it.” eNow tries to combat this challenge by bringing a demonstration truck to tradeshows and one-on-one meetings to show firsthand how the technology works. Creating partnerships with OEMs and system providers has also been key (see sidebar, pg. xx), and will continue to be, in order to help grow the presence of solar power for mobile applications.

Take a ride on the Sun-Bus

SunPods, a manufacturer of photovoltaic systems, has developed the Sun-Bus Power System. Thin film solar panels on the roof of the bus capture energy from the sun and send it to a system under the bus floor consisting of an inverter, batteries, charge controllers and wiring. The captured energy is converted by the onboard system into electricity that can be used to power WiFi, mobile devices and air conditioning units when the bus is stationary and the engine is off.

With the Sun-Bus Power System bus passengers can stay comfortable and entertained while bus owners can reduce their use of fuel as well as emissions. In addition, unnecessary engine idling can be eliminated.  The system can be integrated at the OEM level on new vehicle designs or retro-fitted onto existing vehicles.

Learn more about the industry partnerships which are bringing solar power into the mobile equipment industry.