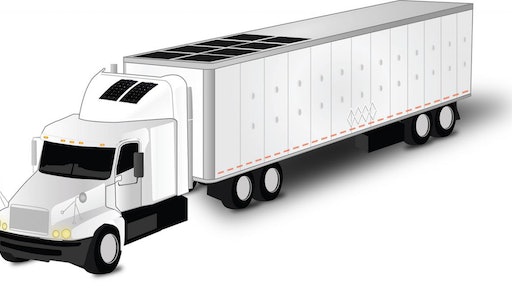 Go Power!, one of North America’s leading innovators of solar-based mobile power solutions for RV, marine, work truck and over-the-road fleet vehicles, announced that its new Solar Flex panels will be used by Cummins Crosspoint to demonstrate new solar applications at the 2014 Mid-America Trucking Show in Louisville, KY. A Solar Flex-powered system will be on display at the Crosspoint Solutions ClimaCab booth #11056 and is being used to show how solar power alone can keep dedicated batteries in their battery-powered cab-comfort systems fully charged and ready to start equipment. The product also can be seen at the Go Power! booth #66173.

The thin, flexible, ultra-high-efficiency Solar Flex GP-FLEX Series panels were originally developed for the RV industry, where AC power loads and HVAC climate control demands are similar to those of a small cottage. The Solar Flex panels were designed to contour to the roof of an RV and to allow the vehicle to operate completely autonomously for weeks at a time, with no need to connect to Shorepower or any other supplemental power resource.

“By focusing on fully solar-powering RVs, we tackled and solved the hardest problem first,” says Sean O’Connor, Sales Channel Manager for Go Power! North America. “I can’t imagine a sleeper cab with a power demand that would even approach what our Solar Flex technology has been able to deliver to full-time RVers.”

The Solar Flex system has the ability to produce about 100 watts-per-foot of trailer length. A 53-foot trailer has the roof area to hold approximately fifty 100-watt Solar Flex panels and to generate about 5,000 watts, or about 280 amps, of DC power per hour. When combined with a Go Power! inverter, a system can produce up to 3,000 watts of AC power per hour. Unlike traditional carbon-based power plants, the Go Power! solar solution regenerates batteries while taking idling, emissions, noise and fuel costs out of the equation.

Cummins Crosspoint was looking for a reliable solar-based method for keeping the dedicated batteries used in Carrier Transicold refrigeration units and ClimaCab battery-powered cab-comfort systems optimally charged. Under normal circumstances, parasitic current draw can drain reefer and APU batteries whenever their dependant engines are not in service.

“We have been looking for a practical solar solution for battery regeneration for a while, but the rigid-panel systems we found couldn’t stand up to the shock, vibration and debris strikes that vehicles commonly encounter; plus, they were heavy and bulky,” says Joe Aschenbener, General Manager for Crosspoint Power & Refrigeration. “The light, thin Solar Flex system is bendable, can mount almost anywhere and is so durable, you can drive over it without significantly damaging it.”

Aschenbener notes that the built-in telematics in many reefer units can completely drain their starter battery within just four days of sitting idle and that the downtime and service cost of jumping a dead battery can really add up. “In the case of our ClimaCab battery-powered cab-comfort systems, it’s critical that optimal charge is maintained at all times,” Aschenbener says. “The trickle charge generated by the new Solar Flex system assures us that reefer and batteries are always at the ready, regardless of the inactivity of the vehicle.”

Solar Flex panels can be safely secured to the cab and trailer roofs with adhesives, eliminating the need to penetrate watertight surfaces with fasteners. At just 3 millimeters thick, the thin panels can flex to follow rooflines and are simple to install, presenting virtually no height restriction issues in the process.

The new Solar Flex panels come in convenient 30-, 100- and 200-watt power kits and can be paired with a wide range of Go Power! inverters for a complete system.