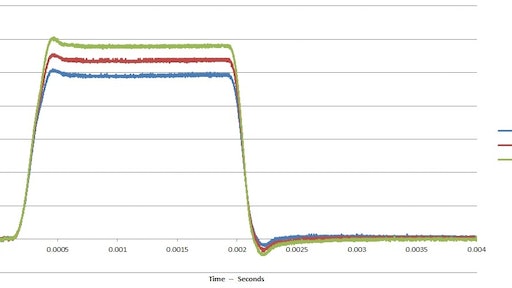 Figure 2. Preliminary data from the proof-of-concept injector demonstrator slated to be tested on an engine soon. Actuator displacement is virtually proportional to current. Measured flow quantities changed with displacement. While a steady open position is shown here, other rate shapes have been tested.

Scientific and mathematical theory is always perfect on paper. In practice, however, is another story. Theoretically, the diesel engine should be able to leverage Rudolf Diesel’s idea to apply the Ideal Gas Law (PV=nRT), to design a system with the most fuel efficient way to turn heat into work. According to Diesel’s analysis, that would be adding heat at a constant temperature (T).

So, what caused this departure from a mathematically ideal way of designing an engine? According to Charles B. Bright, PE, of Great Plains Diesel Technologies, LC, “There hasn’t been an electrical actuator technology that can keep up with the theory to run on a modern engine.”

Solenoids are very basic electric switches that, due to limited force, control a pilot valve with only an open or closed option for operation. “That’s not how you want to add fuel. According to Diesel, you want to add fuel at a gradually changing rate that matches the engine’s demand,” Bright explains. “The fundamental limitation of injectors right now is that you can’t manipulate that valve variably. To match each engine load and speed combination, you want to be able to proportionally adjust the rates of opening and closing, the maximum open position, and the timing.  You may also wish to quickly inject several small, closely spaced amounts before and/or after the main injection.”

The pilot valve controls the pressure in a chamber which creates either the presence or absence of the force required to operate the needle. Draining and filling the chamber imposes time delays which affects an engine’s performance. Great Plains’ initial technology demonstrator showed three times the expected displacement which meant it could operate the needle directly. “Direct operation is the key to better performance,” explains Bright.

Fuel injection, ideally for a thermodynamically optimized engine system, should change on the parameters of load and speed constantly. That is why Bright designed and developed his magnetostrictive actuator technology—to control the rate at which heat (in this case in the form of combusted fuel injected into the engine system) is added so the gas in the combustion chamber stays at a constant temperature.

“When you dump in excess fuel, it turns into heat and the temperature rises. That is where the fuel economy is going – raising the temperature of the gas mixture in the cylinder in the combustion chamber. If the temperature of that gas goes up significantly, then the heat leaks out into the radiator and you lose the energy of that heat,” says Bright.

“What we can do with the magnetostrictive actuator is slow down the rate at which the heat is added by slowing down the fuel addition to the mixture. We are simply adding the fuel at a constant temperature so while the piston is withdrawing and the pressure is falling, you’re adding heat so the pressure doesn’t fall too drastically.” Even so, while the engine is running the actuator can be re-programmed to add fuel as it has always been added to a particular engine, preserving its original character if so desired.

The magnetostrictive actuator technology is built using an alloy originally developed by the Navy for its sonar units—Terfenol-d. “The ‘Fe’ in Terfenol-d stands for the iron that is added to the material, which is grown in a crystallographic way to produce a solid alloy rod,” explains Bright.

The Terfenol-d alloy also contains the rare earth element Terbium (Tb) that is particularly strange due to a distorted electron cloud (non-spherical). Because of the element’s bizarre atomic structure, it elicits magnetostriction (a property of magnetic materials that causes them to change shape or dimension during magnetization), which, as a quantum mechanical effect, does not fatigue. Piezoelectric materials demonstrate similar properties, but because their effects are due to crystal structure and are not fundamentally atomic, the effect eventually fades away and thus cannot work for fuel injector applications.

“I used to work for the maker of this material, which was contracted by the Navy to make the alloy for their sonar units undersea,” Bright says. “Because the magnetostrictive properties of the material do not fatigue, we get this durable thermal expansion-like effect, all because of this non-round atomic phenomenon in the Terbium atom. Magnetostriction is basically like thermal expansion except that is electrically controllable and a faster process. You have the same magnitude of force and displacement as thermal expansion, but its elastic response to a magnetic field happens at sub-microsecond times.”

Efficiency at its purest

The origin of this actuator technology application was driven by the need for speed to reduce emissions, Bright says. “Now, I’m just giving the engine manufacturer another variable to adjust during engine design and development to modify the performance output and provide better fuel economy from the beginning. Although, truly, a more fuel efficient engine would have a cleaner combustion which would mean fewer particulates created, so there would realistically be fewer emissions to eliminate because the process would use less fuel.” To take that one step further, improving engine performance per gallon of fuel used saves fuel, which saves money.

All engines are built around how heat (combusted fuel) is added. If the heat is added in a different manner, it certainly will affect the engine’s design, but how remains to be seen. “This technology offers a degree of control an engine manufacturer has never had before. How they want to use it is to be determined by the individual engineer.”

“Right now, thermal efficiency of an over-the-road truck is around 42-43%. That means approximately 42-43% of the diesel fuel is actually turned into work. This actuator has the potential to raise that to 60%, and that is a conservative number from Diesel’s analysis.” In a third-party SAE paper, Reactivity Controlled Compression Ignition (RCCI) Heavy-Duty Engine Operation at Mid-and High-Loads with Conventional and Alternative Fuels, (SAE Paper No. 2011-01-0363, http://papers.sae.org/2011-01-0363/), the lab test showed an efficiency of 59% for E85-diesel, gasoline-diesel, and gasoline-gasoline+DTBP (di-tert butyl peroxide cetane improver) fuels respectively.

The paper also demonstrates the irrelevance of fuel type to the engine’s performance. Any suitable, thin, flammable liquid (that the engine was designed to handle for its properties of corrosion resistance, viscosity, lubricity, surface tension, etc.) can be used. “It doesn’t matter what goes into the tank, because all you are doing is adding heat to the engine. If you add heat in the thermodynamically correct way, as long as your hydromechanical section has accounted for the different physical properties of various fuels, you can put whichever is cheapest in the tank,” says Bright.

“The injector is designed to deal with certain physical properties of fuel, and the engine is equipped with feedback to tell how much power each cylinder is producing in regards to timing and efficiency. The engine is just looking for heat addition at the right time; and if it’s not getting it at the right time, it can adjust itself programmatically. It’s continuously variable.”

Since the magnetostrictive actuator technology is fully electronic and continually adjustable, the engine is being tuned continuously to keep each cylinder balanced to the rest, which reduces noise and vibration of the engine system.

Another interesting consequence to consider is the possibility of shrinking the radiator and/or cooling system. Especially considering how much hotter Tier 4 engines are burning, and the added cooling systems that have been added to the engine package to keep it running efficiently, it would seem that with appropriate thermal management the cooling needs could be reduced, which would reduce the overall engine package’s size, weight and complexity.

“The engine block is a very heavy structure. If you’re adding the heat as the engine needs it and turning it into work, you don’t have a shock wave from the initial ignition, so you also don’t need all of the weight and structure there anymore either,” Bright adds. “There will always be internal friction and heat rejected—you are never going to get rid of that. But, if you can eliminate one of the fluids like the coolant, there is a gain in engine system simplicity.

“This technology just gives the engineer another variable to play with during engine design and development. Who knows what the effects could be…it could revamp how we think about engine design altogether.”

Since this interview, Great Plains Diesel Technologies began testing the technology at Excel Engineering in Diagonal, IA. The proof-of-concept injector proved that it will work on an engine and began to show its potential to continuously control the rate at which heat is released. “We wanted to go to an independent engine test lab for a neutral third party to give credibility to the results,” Bright said.