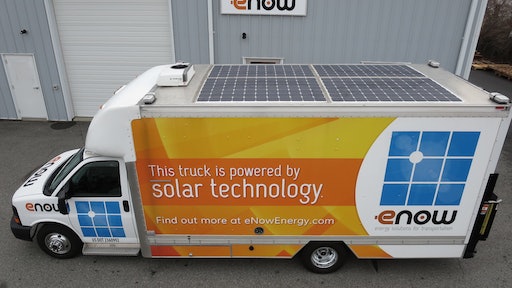 eNow Inc. has made available a new report which shows how fleets can improve fuel economy anywhere from 1.4 to 15.7%, depending on the application, with the company's solar-based auxiliary power systems.

The report, "Fuel Economy and Performance Testing of a Class 8 Sleeper Tractor Simulating eNow's Solar Charging System," provides the results of testing conducted by the Center for Automotive Research (CAR) and Testing, Engineering & Software Development Services (TESS), both of which are a part of The Ohio State University's College of Engineering.

The goal of the testing was to determine if fuel economy differences existed between a Class 8 truck during normal operation and when charging a bank of auxiliary batteries. Normal operation was chosen to simulate the benefits of the eNow solar charging system while the battery charging mode was used to show how these types of vehicles currently operate when charging batteries for no-idle systems. A series of two different drive cycles—a 60 mph steady state test and an idle test—were conducted on a 2005 Freightliner Columbia 120.

For additional information about the testing procedures and further results, the full report can be downloaded from eNow's website.