A brief look at research carried out this year for the upcoming IDTechEx Research report, “Industrial and Commercial Electric Vehicles 2016-2026.” 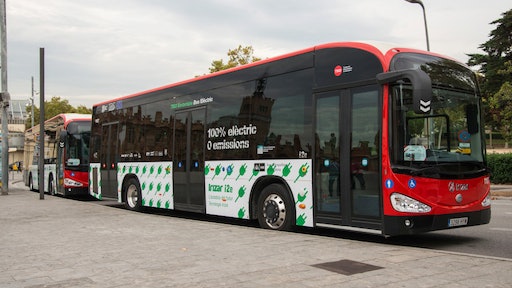 In the past, many companies made both buses and trucks and sold them in the same countries, but now the two types of vehicles are drifting apart in design and application. Buses have become a heavily rigged market for a very good reason: more and more of us are living in cities and we are choking to death. The World Health Organisation puts deaths due to air pollution at over two million yearly. Even London, with one of the world’s largest hybrid bus fleets, is killing thousands yearly from traffic pollution, buses and taxis being major culprits. Candidates for London Mayor have been vying in their promises to correct this and a pure electric double decker is being trialed.

Order the full report from IDTechEx, "Electric Buses 2016-2026" at www.IDTechEx.com/buses.

Nearly all buses are now used in cities and they are not run primarily for profit, their purchasers being either government or strongly supported and guided by government, in most cases. This directly affects the choice of powertrain because China has a huge program to introduce buses, and it no longer gives strong support to versions that do not plug in, with the money and tax breaks going to hybrids with long pure electric range for emission free travel in city centers and to pure electric buses. Faced with this, the manufacturers and purchasers are prioritizing the simpler pure electric buses with orders of up to 2000 at a time.

This is echoed to a lesser extent in other countries. Norway has set 2025 for banning all new cars that are not pure electric, and a few countries and cities from Austria to Hamburg and the Netherlands to Paris are showing signs of doing something similar. However, although this will often affect buses and trucks as well, trucks are becoming a more different business. 82.5% of buses over eight tonnes sold in the world in 2016 are being sold in China, where the government makes sure that virtually all of them are made in China. IDTechEx forecasts sales of a massive 218,000 large electric buses in China in 2016, the rest of the world having also grown strongly to reach a figure of 78,000. A good business to be in but you need to compete with Chinese buses now being offered worldwide and likely to be a fraction of the price of ones made elsewhere. Level playing field? Forget it.

In 2026, most, possibly all, bus replacement in China and most other major bus using countries will be e-bus, probably with India an exception, due to political difficulties. In 2026, China the heavy bus replacement rate will be 190K compared with something in the region of 20K for Europe, 30K for the US, including all those school buses, and 10K for Other.  Buses are replaced earlier in China at around eight years than in some other countries where 12 years can be the figure.

There may be appreciable use of lithium metal batteries with triple energy density and lithium-ion batteries with double energy density / half cost, and structural electronics may be coming in to replace ladder chassis with monocoque bodies later made of electrically smart materials such as the energy storage being load-bearing bodywork.

Not so trucks: a much smaller business, it is spread across the world more evenly and these vehicles are mainly independently owned, fiercely run for a wafer thin profit and driven inter-city, in many cases. This leads to very different powertrain decisions. Volvo Truck Corporation said in a recent conference that the lowest cost, easiest way of meeting the onerous carbon dioxide regulations is the 48V mild hybrid powertrain. This is appearing in cars and light commercial vehicles from next year. It is of great interest to truck manufacturers. The potential 15-20% reduction in emissions can mean a precious 20% reduction in fuel consumption rapidly and at low cost by upgrading existing powertrain production. Retrofitting is also in prospect for a lesser gain.

All of the top Tier One component suppliers are offering 48V parts or plan to do so. For example, Delphi will have a system on the market in 2018.

“Car buyers will buy 48-volt mild hybrids for the added performance, and car companies will offer the technology because it will help them comply with environmental regulations,” said Jeff Owens, Delphi’s Chief Technology Officer. “One out of every 10 cars sold globally in 2025 will be a 48-volt mild hybrid. That’s 11 million units a year – three times the volume of pickup trucks sold annually.”

Truck makers will go 48V purely for cost reduction and emissions compliance, says Volvo Truck. However, that huge volume of cars using the systems will feed onto lower priced, better quality 48V parts for truck makers and operators. So what is it?

The 48V mild hybrid powertrain is an incremental improvement to existing C car and larger powertrains to prevent them becoming illegal under promised tough carbon dioxide emissions legislation in 2025 and 2030. Attractiveness of 48V mild hybrids to OEMs is enhanced by the forthcoming Worldwide Harmonized Light Vehicle Test Procedure & Cycle (WLTP/WLTC). In the WLTC, the proposed acceleration and deceleration phases are much more aggressive compared to the NEDC (New European Driving Cycle). Deceleration phases count for a higher proportion of the proposed cycle (43.1% compared to 31% for the NEDC, according to analysis by BMW). WLTC will suit the energy regeneration, sailing and torque boost functions that 48V hybrids can provide and give more CO2 saving benefits than NEDC. NEDC cycle 48V mild hybrid savings are 10-15% but on the WLTC test the benefits are in the range of 15-20%. Local emissions such as NOx, SOx and diesel particulates are reduced, not just global warming from CO2. It does this by downsizing the internal combustion engine by up to 60%, downspeeding and getting the same performance by boosting peak power electrically when needed.

How it is done

Choosing 48V means keeping peak power within the 60V limit when legislated safety measures become onerous yet increasing by four times the electricity stored and moved around the vehicle. The benefit in emissions is achieved by replacing the alternator and with a motor-generator that does engine starting, boosting and capturing efficiently the regenerative braking thanks to a lithium-ion battery storing four times as much energy as the lead acid battery which is retained – for now. The new motor generator is most easily fitted as a belt drive drop-in replacement. All that permits some electrification of other parts that a lead acid battery could not manage on its own. For example, an electric supercharger saves emissions by giving maximum boost from stationary.

There is more. The up to 15% saving in emissions from all that can rise to 20% if the belt is abandoned and the motor-generator can directly drive the wheels in pure electric vehicle mode. For instance, one can have silent takeoff, all electric creeping in traffic, active coasting (“sailing”) due to electric power and silent all electric parking. The truck is more pleasant to drive and it causes less disruption in built-up areas, say at night. No noisy stop start in traffic or at destinations, for example. Electrification of steering, aircon and much more gives emissions and performance benefits and at last you can add many forms of regeneration (regenerative active suspension, turbine in exhaust etc.) and external harvesting of sun, wind etc. that the old powertrain could not manage.  Nonetheless, Volvo Truck says the cost of ownership reduction is what makes truck operators salivate the most.

48V mild hybrids are turning out to be so improvable and appropriate that they will impact alternatives. In particular, IDTechEx and others have pointed out that you get almost all the benefits of strong hybrids that do not plug in at a fraction of the cost. Valeo and Hyundai have estimated that the 48V option will be only 25-50% of the cost of a strong hybrid powertrain that does not plug in and have almost all the benefits, though the pure electric range will be more like 100 meters than 5 km or so. Goodbye the traditional Prius car and the hybrid truck as we know it today?

In IDTechEx interviews for its report, “Electric Buses 2016-2026” (www.IDTechEx.com/buses), no bus companies were prioritizing 48V mild hybrid powertrains because they are under intense political and financial pressure to go pure electric to reduce local pollution in cities. Nonetheless, the powertrains may converge later as increasingly tough legislation, particularly global warming / carbon dioxide related, progresses and moves towards the end game of pure electric vehicles of all types. At the recent AVERE conference in Amsterdam, it was reported that only 400 km of overhead catenaries for charging pure electric heavy trucks across Germany would allow them to span the country at a small fraction of the cost of fuel cell infrastructure. At the Future Powertrain conference in the UK recently, Ricardo calculated that heavy trucks with fuel cell powertrains simply cannot carry enough hydrogen for long range use, avoiding the need for some of that infrastructure, and pure electric versions could not carry enough batteries for long range. The IDTechEx view is that the world is going pure electric and catenary charging is an important part of this.

Order the full report from IDTechEx, "Electric Buses 2016-2026" at www.IDTechEx.com/buses.