The company will now be known as Flash Battery and the new manufacturing facility is five times larger to aid increased production of lithium batteries. 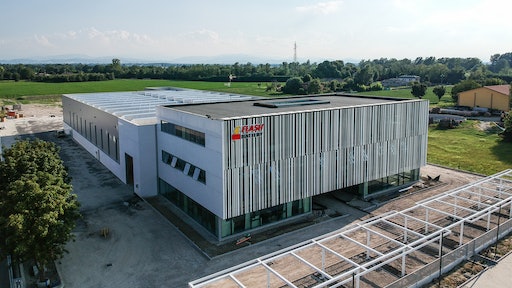 “Flash Battery” will no longer be just a trademark but will become the new name of Kaitek S.r.l., leader in the production of lithium batteries for industrial and electric vehicles.

The company name changed on August 1, just a few hours before the company moved from Calerno to the new headquarters in Via XXV Aprile, in Sant’Ilario d’Enza, where Flash Battery will develop its activities in the industrial facility built on an area measuring 20,000 m2, with 1,500 m2 of office space and 3,200 m2 of production space, with the possibility of a further 5,000 m2 expansion.

“The new name,” explains Marco Righi, CEO of the company from Reggio Emilia—which in 8 years of activity has reached a leading position in the sector, with a turnover of € 14 million, 56 employees and exports to the most industrialized countries in the world—“basically aims to consolidate our company identity, instantly highlighting not just our industry category, but also one of the main features of our products: the recharge speed which gives us an essential competitive advantage in terms of the electric vehicle industry as well as a significant part of the manufacturing industry, which is progressively converting production to electric energy.”

All Flash Battery activities will be concentrated in the new industrial facility in Sant’Ilario d’Enza, which is five times larger than the present-day premises. Since the day the first stone was laid less than a year ago, the number of employees has increased from 45 to 56, with eight of the new 11 employees being hired during the first 6 months of 2020, right in the midst of the COVID emergency.

“The effects of the pandemic,” explains Righi, “have slightly slowed down production, but have not stopped the plans to enlarge and consolidate our research and development, design and marketing areas as well as innovative international projects. These are the main areas where the new professional figures hired during the first six months of 2020 will work, and a further five who will be hired before the end of the year, taking our workforce to over 60 people.”

The new employees have not changed one of the peculiarities of the company (the average age of employees is 33), for which Flash Battery has twice (in 2019 and 2020) been awarded the prize for the Best Under-40 company in the Emilia-Romagna region.

“We work in a sector where growth goes hand in hand with the ability to innovate, and it is plain to see that our close relations and collaboration with various technical institutes and the University of Modena and Reggio Emilia (especially with the departments of engineering) allow us to bring young people into the company, who during their studies have had the opportunity to become acquainted with our production activities and to measure themselves against our expectations in terms of ability and passion,” says Righi.

On the eve of the move to the new premises, the company from Reggio Emilia has also signed an important agreement with EFA France, European leader in electrification technologies.

“This partnership,” states Righi, “is all about innovation and is aimed at a market, namely the transalpine one, which offers many opportunities for expansion, because it is particularly sensitive to the theme of electrification, just like the German market; it comes as no surprise that France and Germany are the foreign markets where we are investing the most.”