Are petrol prices affecting the electrification of industrial electric vehicles?

An investigation into the new dynamics of petrol prices and how they are affecting electric vehicles in the automotive and industrial segments, including commercial, construction, agricultural and mining. 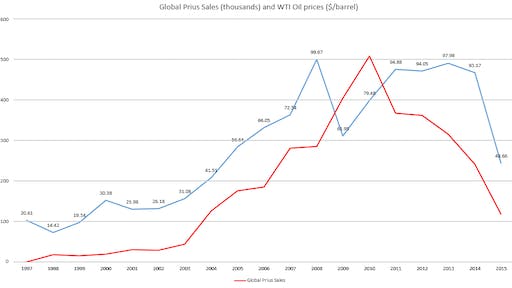 Year 2015 sales are cumulative sales from January to July of 2015. Toyota Prius sales reported from Wikipedia.

Originally, global incumbent automotive companies did not immediately jump to the idea of pure electric cars, rather they presented resistance. And, while global regulations have pushed toward emissions reductions, they did so in a gradual way which did not demand dramatic reductions that only pure electric vehicles could deliver. This gradual transition allowed innovation to decide which technologies would push emissions down. Incumbent companies, being risk averse, decided to move incrementally toward low carbon emissions.

In the last two decades, Toyota was able to capitalize on high international oil prices, OPEC oil market dynamics and on the U.S.’s dependency on oil imports. These factors allowed Toyota to become the leader of electric vehicles, not only in the automotive sector through the launch of the Toyota Prius, but also leverage its technology to become the global leader in industrial electric vehicles, such as forklifts.

The new dynamics of electrification in a low oil price era

While Toyota is aiming to reproduce the Prius strategy with the hydrogen car, Mirai, the world is not the same as when the Prius emerged. For example, global battery manufacturers are consolidating automotive clients and scaling their manufacturing capacities to allow a dramatic reduction in battery prices.

But truly, the new era is dominated by climate change, and the new politics and economics of the oil industry. According to the Free Exchange blog from the Economist, "Sheikhs v shale: The impact of the tumbling price of oil and what to expect from Britain's Autumn statement," the last quarter of 2014 set the stage of this new dynamic when OPEC countries decided to keep production at high levels in order to keep oil prices low enough to wipe out the business of their new competitors—the American shale gas producers.

Oil prices have always been linked with petrol prices, so when the Hybrid Prius was launched it rode the wave of high oil prices and high petrol prices. Recently, sales of the Prius have declined, first as part of the general collapse of the auto industry related with the Great Recession of 2008 and then they have not recovered following the decline of oil and petrol prices.

What do automotive hybrids have in common with industrial hybrids?

In the context of low fuel prices, IDTechEx research found that there has been a slowdown in the electrification of industrial vehicles and machines. Nevertheless, while the automotive industry has fuel efficiency as the strongest factor for an acquisition decision based on rational purchasing criteria, in the industrial sector there are other factors.

Drivers for developing hybrid electric vehicles in the industrial sector include improvements in productivity, cost, weight, vehicle life, safety and fuel efficiency. For example, the Finnish hybrid solution provider VISEDO worked with the Austria-based Kormann Rockster Recycler GmbH (Rockster) Hybrid Impact Crusher R1100DE stone crusher (download vehicle information at www.oemoffhighway.com/12172000). The vehicle was equipped with a hybrid powertrain that includes the use of supercapacitors. The concept stores electrical energy to cover any peak loads during equipment operation so the diesel engine can operate at nearly constant optimal speed and consequently save fuel.

According to Rockster, the technology can save upwards of 16,000 L of diesel fuel per year for a single machine. And while the use of a hybrid powertrain allowed for 30% lower fuel consumption, it had an even greater impact on productivity with a 40% increase (see chart XXXXXX).

In other sectors, there are unique drivers for electrification that are sector-specific. In the mining industry, for example, it costs a significant amount of money to pump air out of a mine in order to clear the dangerous exhaust emissions created by fuelled vehicles. This high cost eats into a mine operator’s bottom line and is a strong incentive to employ electrified vehicles to reduce or eliminate the vehicle emissions altogether. There are other trends though that may go with or against electrification, such as the case of autonomous mining vehicles.

So, while low fuel prices may be delaying the continued electrification of hybrid industrial vehicles, there are other industry-specific drivers that favor the change to electric powertrains. In addition, it is expected that oil prices will recover in the medium term as estimated by the World Bank (see chart XXXXXX). Electrification will pay off now, but the best is yet to come.

IDTechEx’s report, Electric Vehicles for Construction, Agriculture and Mining 2015-2025, (www.IDTechEx.com/cam) explains the drivers for electrification of vehicles in these industries. IDTechEx builds upon its 15 years’ experience in analyzing 46 electric vehicle segments, the future of electronic devices and emerging energy storage technologies in order to provide a comprehensive analysis of the current state of development of these technologies and its market potential. It has conducted several interviews with key companies and organizations developing these technologies, and attended key conferences around the world in which highlights of these technologies have been presented.

New electric motor options are gaining acceptance for use in heavy-duty on- and off-road applications.
July 30, 2019

The EnduraMax 75i Brushless Motor with Integral Drive is capable of controlling torque, speed, and position.
Allied Motion Technologies Inc.
May 2, 2019

The 130 kW HVH e-motor offers the benefits of durability, good power density and the possibility of peak efficiencies of more than 95%.
BorgWarner Inc.
February 26, 2019

Danfoss expands its electrification capability with the acquisition of AXCO-Motors, a leader in the design of large electric motors and generators.
Danfoss - Danfoss Power Solutions
September 4, 2018