FPT Industrial’s R&D team is working on a project to develop Hydrogen Fuel Cell technology which in the long term could lead to a new zero emissions transport solution for heavy-duty vehicles. 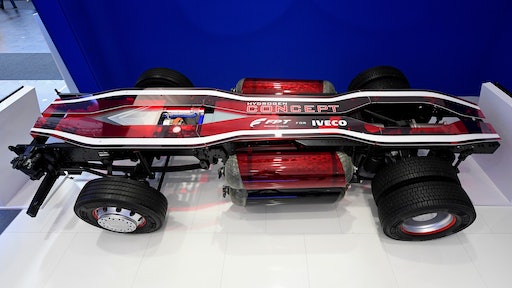 FPT Industrial, the powertrain brand of CNH Industrial N.V., believes that this Hydrogen Fuel Cell technology could be used in commercial vehicles to deliver zero Tank-to-Wheel and Well-to-Wheel emissions. Furthermore, it could play a significant role in the development of a virtuous cycle, where hydrogen is produced locally through renewable energy sources such as biomethane, wind or solar energy. The aim of FPT Industrial’s R&D project is to explore the possibilities of using hydrogen as a zero emissions fuel alternative for the long-haul transport market while delivering the level of performance, autonomy, efficiency and reliability that this sector demands.

This concept has been designed with a carbon fiber, high-resistance fuel tank from which the hydrogen flows directly into the fuel cells to generate the electricity that powers a 400 kW engine. It is this combination of electricity and fuel cells that creates a zero emissions vehicle and demonstrates that hydrogen is the next phase in the development of the use of natural gas in long-haul commercial vehicles requiring zero nitrogen oxides, zero particulate matter and zero CO2.