Bosch examines the benefits of hydrogen fuel cell powertrains which it plans to bring to market in 2022-2023. 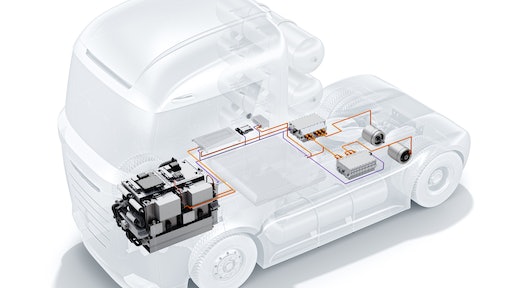 Electromobility is picking up more and more speed. It is an important element in reducing CO2 emissions from traffic. But how economical is it to operate heavy-duty trucks with 40-ton payloads over long distances using only battery-electric power? Given the battery weight, long charging times, and limited range of today’s technology, electric powertrains aren’t the first choice for heavy trucks.

Nevertheless, even 40-ton trucks will be able to travel more than 1,000 km in all-electric mode in the near future. The key to this is the Bosch fuel-cell powertrain. When powered with hydrogen produced using renewable energy, this powertrain enables the climate-neutral transportation of goods and commodities. Bosch is taking the first step in this direction by developing the fuel-cell powertrain primarily with a focus on trucks, and the company plans to start production in 2022–2023. Once they have become established in trucks, Bosch fuel-cell powertrains will then increasingly find their way into passenger cars – rightly making them an integral part of tomorrow’s powertrain portfolio.

In a fuel cell, hydrogen (H2 ) reacts with oxygen (O2 ) from the ambient air. The energy this reaction releases is converted into electricity, which is used for driving. Heat and pure water (H2O) are other products of the reaction. H2 is obtained using electrolysis, in which water is separated into hydrogen and oxygen with the aid of electricity. Generating this electricity from renewables makes the fuel-cell powertrain completely climate-neutral. Especially for large, heavy vehicles, fuel cells have a better carbon footprint than exclusively battery-electric powertrains if the CO2 emissions for production, operation, and disposal are added together. All that fuel-cell vehicles need in addition to their hydrogen tank is a much smaller battery for intermediate buffer storage. This greatly reduces their carbon footprint in production. “The advantages of the fuel cell really come into play in those areas where battery-electric powertrains don’t shine,” explains Dr. Uwe Gackstatter, president of the Bosch Powertrain Solutions division. “This means there’s no competition between fuel cells and batteries; instead, they complement each other perfectly.”

Hydrogen has a high energy density. One kilogram of hydrogen contains as much energy as 3.3 L of diesel. To travel 100 kim, a passenger car needs only about 1 kg; a 40-ton truck needs a good 7 kg. As with diesel or gasoline, it takes just a few minutes to fill an empty H2 tank and continue the journey. “Fuel cells are the first choice for transporting larger loads for many kilometers every day,” Gackstatter says, summarizing the advantages. In the EU-funded H2Haul project, Bosch is currently working with other companies to build a small fleet of fuel-cell trucks and put them on the road. In addition to mobile applications, Bosch is developing fuel-cell stacks for stationary applications with solid-oxide fuel-cell (SOFC) technology. One intended use for them is as small, distributed power stations in cities, data centers, and charge points for electric vehicles. If the Paris climate action targets are to be met, in the future hydrogen will need to power not only cars and commercial vehicles, but also trains, aircraft, and ships. The energy and steel industries are also planning to make use of hydrogen.

One of the decisive factors for a powertrain’s eco-friendliness and profitability is its efficiency. This is around a quarter higher for fuel-cell vehicles than for vehicles with combustion engines. Employing recuperative braking further increases efficiency. Battery-electric vehicles, which can store electricity directly in the vehicle and use it for propulsion, are even more effective. However, since energy production and energy demand do not always coincide in time and location, electricity from wind and solar plants often remains unused because it cannot find a consumer and cannot be stored. This is where hydrogen comes into its own. The surplus electricity can be used to produce it in a decentralized way, ready for flexible storage and transportation.

The cost of green hydrogen will come down considerably when production capacities are expanded and the price of electricity generated from renewables declines. The Hydrogen Council, an association of over 90 international companies, expects costs for many hydrogen applications to fall by half in the next ten years – making them competitive with other technologies. Bosch is currently working with the startup Powercell to develop the stack, the core of the fuel cell, and make it market-ready, with manufacturing to follow. The goal is a high-performance solution that can be manufactured at low cost. “In the medium term, using a vehicle with a fuel cell won’t be more expensive than using one with a conventional powertrain,” Gackstatter says.

Today’s network of hydrogen filling stations doesn’t offer complete coverage, but the roughly 180 hydrogen filling stations in Europe are already sufficient for some important transport routes. Companies in many countries are cooperating to push ahead with the expansion, often supported by state subsidies. In Germany, too, politicians have recognized the important role of hydrogen in decarbonizing the economy and have anchored it in the National Hydrogen Strategy. For example, the H 2 Mobility joint venture will have built around 100 publicly accessible filling stations in Germany by the end of 2020, while the EU-funded H2Haul project is working not only on trucks but also on the filling stations required on its planned routes. Japan, China, and South Korea also have comprehensive support programs.

The use of gaseous hydrogen in vehicles is safe and no more hazardous than other automotive fuels or batteries. Hydrogen tanks do not pose an increased risk of explosion. It is true that H 2 burns in combination with oxygen and that a mixture of the two beyond a certain ratio is explosive. But hydrogen is about 14 times lighter than air and therefore extremely volatile. For example, any H 2 that escapes from a vehicle tank will rise faster than it can react with the ambient oxygen. In a fire test conducted on a fuel-cell car by U.S. researchers in 2003, there was a flash fire, but it quickly went out again. The vehicle remained largely undamaged.

Hydrogen production is a proven and technologically straightforward process. This means it can be ramped up quickly to meet higher demand. In addition, fuel cells have now reached the necessary technological maturity for their commercialization and widespread use. According to the Hydrogen Council, the hydrogen economy can become competitive in the next ten years, provided there is sufficient investment and political will. “The time for entry into the hydrogen economy is now,” Gackstatter says.