CAS DataLoggers is providing system monitoring technologies to Twin Disc for use in a prototype transmission. 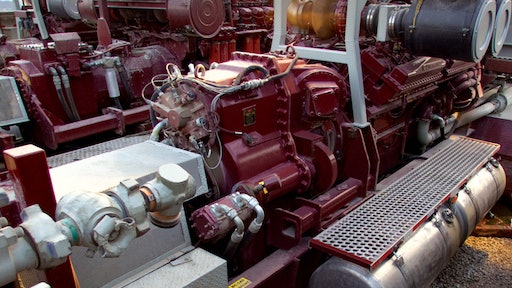 Recently CAS DataLoggers provided the data logging solution for Twin Disc Incorporated, one of the world’s leading designers and manufacturers of power shift transmissions, headquartered in Racine, WI. Twin Disc began a research project to monitor transmission system parameters and verify duty cycle information for their prototype power shift transmission slated for use in the oil and gas market. Engineers began searching for a versatile datalogging system that accommodated a variety of analog and CAN inputs and which could also connect to a cellular modem to enable remote monitoring. This versatile system would need to be rugged enough to survive the high vibrations present during oil and gas fracturing while also withstanding high G-forces during its transportation from site to site. CAS DataLoggers was able to provide Twin Disc with a data logging solution which worked right out of the box, offering simple programming and ease of use to allow a quick start for the project.

Twin Disc installed three dataTaker DT80 Intelligent Data Loggers and 3 CANgate CANbus to Serial Converters in portable enclosures, each fitted with an external USB port. CAS DataLoggers also provided a Bluetree cellular modem for one of the custom monitoring systems, which gave Twin Disc remote data access for the project. The enclosed dataloggers, which were installed on the side of the fracturing rigs, stood up well against vibrations and from being jostled from side to side in transit between jobs. Once set up, the dataTakers monitored roughly eight analog signals and 10 to 15 CAN messages at a rate of one sample per second. The loggers also recorded transmission pressures using ratiometric pressure transducers. Additional data including well pressure and various engine data and pump parameters were collected via the J1939 CANbus.

Operators utilized both the modem’s FTP data transmission and the dataTaker’s USB data collection via the enclosures’ ports in the front. Additionally, the DT80s included free DeLogger 5 graphical software enabling intuitive programming and also displayed and analyzed real-time and historical data. Twin Disc Project Engineer Richard Shaw explains the systems’ utility: “It’s very easy to program the dataTakers in the DeLogger 5 programming environment, and with the DT80s we have the flexibility to use FTP based on time or user input, such as at the end of a job. It’s great to be able to send the data with a single button push whenever we’re done recording.”

Twin Disc’s transmission monitoring project benefited significantly following installation of the dataTaker DT80 data loggers and CANgates. For the first time, engineers were able to monitor and analyze long-term duty cycle information on their products, leading to a more detailed understanding of their customers’ equipment; for example, the duty cycles their customers reported often differed from the loggers’ findings. Additionally, due to their rugged construction, the dataTakers were able to withstand the vibrations and G-forces in the project’s demanding environment. Preparing for the project, Twin Disc had several phone conversations with CAS DataLoggers engineers, and the distributor also hosted a dataTaker training session to get the application quickly underway. The research project has been ongoing, and meanwhile Twin Disc has successfully begun prototype monitoring and has since used the dataloggers in other applications.

Shaw further comments: “We were specifically looking for a solution that worked right out of the box, and the dataTakers were much easier to program than the previous products we’ve used.  We were also impressed by CAS DataLoggers tech support every step of the way, from our initial inquiry to the post-purchase training that got us up and running.”