TE Connectivity's KILOVAC relay is being utilized on the chromatograph unit of the Mars rover Curiosity. 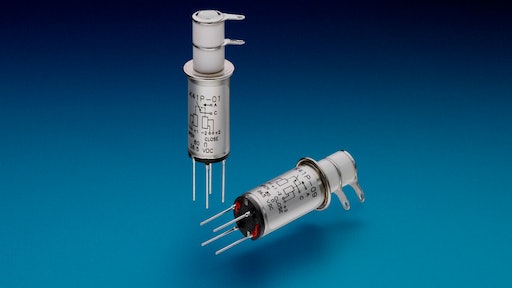 NASA’s Curiosity rover landed in the Gale Crater on Mars on August 5, having flown over 127 million miles since its November 26, 2011 launch from the Cape Canaveral Air Force Station in Florida. As part of NASA’s Mars Exploration Program, the Curiosity rover and its Mars Science Laboratory will carry out their mission to look for evidence of past or present habitable environments.

TE Connectivity's KILOVAC K40P high-voltage relay was chosen to assist in the mission in the chromatograph unit. TE’s relay is being used in the Curiosity rover’s gas chromatography tool, which along with mass spectrometry and tunable-laser spectrometry, will study the chemistry relevant to life. As part of such a crucial mission, TE’s relay needed to meet the high demands for products that could provide as much space and weight savings as possible, while also performing in the extremes of a space environment and providing absolute reliability and long service life.

Rated for voltages to 5 kV, the KILOVAC K40P single-pole, single-throw relay switches low-current loads up to 35 amps. To reduce size and weight, the relay uses a vacuum dielectric to achieve a compact size of 1.85-inch height and 0.65-inch diameter and a weight of 1 ounce. Performance includes a minimum mechanical life of 10 million cycles and a fast operating speed of 1 millisecond.

“TE’s KILOVAC relay is ideal for applications like the Curiosity rover primarily because of its light-weight and small, compact design. As NASA set out to build a complex science lab in this rover, size was a critical factor,” says Peter Kohlmeier, Program Manager in TE’s Aerospace, Defense & Marine business. “TE’s relays have been used extensively and for years in space. TE’s KILOVAC products are suitable for extreme temperatures as well as other severe environmental factors, and undergo TE’s extensive reliability, quality control and testing.”

KILOVAC relays have been used in space applications for more than 30 years, since its first mission in lunar landing equipment in the 1970s to today where they are used extensively in space satellites and are currently used throughout the International Space Station.

“The KILOVAC relays have a long history of proven reliability in space missions and applications,” says Karl Kitts, Director of Development Engineering for High Performance Relays in TE’s Aerospace, Defense & Marine business. “The extensive testing process built a high degree of confidence in the relay’s suitability for the application. To many engineers who have specified relays over the years, KILOVAC is synonymous with rugged reliability in the most demanding environments.”

The 2,000-pound rover is expected to operate for around 98 weeks—one Martian year—in an inhospitable environment akin to a cold, rocky desert. The average surface temperature is -54°C, but can reach a relatively sweltering 27°C along the equator at noon. The Curiosity rover’s landing site is 4.6 degrees south of the Martian equator.