Magnetek will be displaying its new M-FORCE SD500 Air Cooled Drive as well as other new drive and control technologies for the mining industry at the 2013 Bluefield Coal Show. 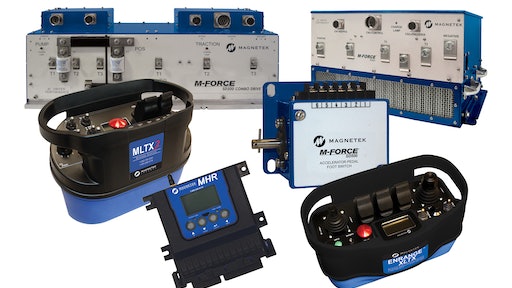 Magnetek’s state-of-the-art M-FORCE SD500 Air Cooled Drive is designed for high system efficiency at a wide range of motor speeds in traction applications or at a fixed speed for hydraulic pumps and fans. This flexible DC input, AC output drive can be used in a variety of mining applications including battery-operated mobile vehicles, conveyors, crushers, drills and locomotives.

The M-FORCE SD500 Combo Drive System combines two variable frequency drives in a common enclosure for combined traction and hydraulic applications. This system includes a rugged controller that monitors and controls the system’s drives, and a graphic display that provides real-time performance monitoring.

The company’s new M-FORCE SD500 Accelerator Pedal Foot Switch provides “on/off” and “speed” reference signals to solid-state controllers such as traction or variable frequency drives. With a simple push of an accelerator pedal, power is transferred to the machine’s actuators. This rugged, all metal device has been lab tested to over 10 million cycles and is ideal for harsh environments and off-road electric vehicles.

Visitors to the biennial event can explore Magnetek’s latest drive and wireless radio control innovations and meet with industry experts at booth 311. In addition, the company will be previewing the cutting-edge M-FORCE GP1000 drive, which is scheduled to be available in 2014.

For autonomous vehicles to take off, President of Volvo Autonomous Systems Nils Jaeger says the technology needs to be mastered and trust earned from society.
Volvo Group Global
December 15, 2020
Follow Us