Bosch investigating use of fuel cell technology in airport vehicles

Bosch has developed a Fuel Cell Control Unit to efficiently manage interactions between system components within a fuel cell system being used as a range extender in an electric baggage tractor. 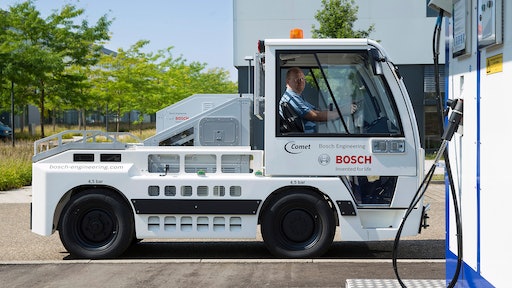 Fuel cells are a key technology in the pursuit of emissions-free mobility. In the future, off-highway applications such as mobile construction equipment, municipal fleet vehicles and airport ground support vehicles will also be able to benefit from their use. An electric baggage tractor created as a part of the publicly funded Innovative Regenerative Onboard Energy Converter (InnoROBE) project is now the first of its kind in Europe to feature a fuel cell that functions as a range extender. The Fuel Cell Control Unit (FCCU) by Bosch Engineering efficiently manages the interactions of all system components and serves as a key component of the fuel cell system. “We develop components and systems as well as provide engineering services for a zero-emissions future in off-highway applications,” says Bosch Engineering GmbH Director Bernhard Bihr. The project was started in August 2012 by the German Federal Ministry for Education and Research in cooperation with project partners Greening GmbH & Co. KG, DLR Institute of Vehicle Concepts, and Fraunhofer NAS, and is slated to be completed by December 31, 2015.

Fuel cell powertrain systems for airport use
The primary mode of conveyance at airports is not the airplane but rather the ground vehicles that transport passengers, luggage and freight to their respective destinations. Airport operators are increasingly making use of alternative powertrain systems in order to reduce emissions and noise. In the future, fuel cells will be the eco-friendly new technology of choice at airports for mobile machinery as well as ground support and fleet vehicles. The benefits of fuel cell vehicles include their greater range and shorter refueling times of just a few minutes. “A baggage tractor with a fuel cell can now last an entire eight-hour shift without recharging the battery,” Bihr says.

Widespread adoption of alternative powertrain systems for off-road applications makes even more sense against a backdrop of stricter emissions legislation for internal-combustion engines over 56 kW (EU Stage IV and US Tier 4 Final). Vehicles with fuel cell powertrain systems operate using hydrogen, which reacts with oxygen inside the cell to form pure water. The energy this process releases is transformed into electrical energy inside the fuel cell, which in turn drives the electric motor. “With this zero-emissions powertrain system we can now power off-highway applications such as forklifts or mobile lift platforms not only at airfields, but also inside buildings and warehouses,” Bihr says. In addition, airport vehicles featuring fuel cell systems run quietly and with little vibration. The first hydrogen refueling stations are already in place at German airports in Stuttgart, Munich and Hamburg, so these systems have the local infrastructure they need.

From control unit to prototype
The nerve center of the fuel cell system is the FCCU, which combines existing Robert Bosch GmbH hardware for mass-production automotive applications with specifically developed new software. The FCCU controls the entire system with its integrated hydrogen, air and coolant regulation. “The first application of our production-ready FCCU was within the context of the InnoROBE project,” Bihr says. Bosch Engineering took on other roles in the project as well. For instance, its engineers closely analyzed the fuel cell system in order to determine the required dimensions of its components. In doing so, they looked at vehicle usage conditions, operating durations, refueling specifications and many other requirements to then determine parameters such as battery size, fuel cell powertrain system power output and hydrogen tank dimensions. They constructed the overall system and optimized the functional interactions of the components along with control and regulation functions. For testing, the engineers availed themselves of an in-house fuel cell laboratory as well as a testing rig for a 20 kW fuel cell. They then constructed a prototype baggage tractor to test out the system in real-world operation. This prototype provides the engineers with vital information on how to further enhance the system. Later on, the baggage tractor will be put into real-world operation at Stuttgart Airport. The objective of Bosch Engineering is to put its entire portfolio of services to work in developing fuel cell powertrain systems for additional types of off-highway vehicles.