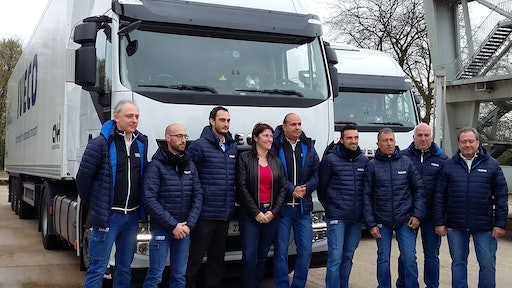 Two heavy-duty Iveco Stralis trucks traveled to Rotterdam, the Netherlands, but unlike your average freight operation, these two semi-automated vehicles are travelling in a platoon – something that up until now has not been performed on a public road. This mission is a part of the European Truck Platooning Challenge, an initiative organized by the Netherlands as part of its 6-month EU Presidency. As a member of the European Automobile Manufacturers Association (ACEA), which is actively supporting and participating in the challenge, Iveco joins five other European truck manufacturers travelling via platoon to an event culminating on April 6 in Rotterdam.

Truck platooning is the linking of two or three trucks in a convoy. These vehicles closely follow each other at a set, close distance by using connectivity technology and automated driving support systems. The truck at the head of the platoon acts as the leader, with the vehicles behind reacting and adapting to changes in its movement. For example, if the platoon leader brakes, all the other trucks in the platoon also brake. Platooning can help make transport safer, cleaner and more efficient, alongside reducing fuel consumption through improved driving practices, and more importantly has the potential to reduce CO2 emissions by up to 10%.

A press conference was held on April 5 in Brussels in promotion of the initiative and to see off the departure of Iveco’s platoon. Representatives from Belgium’s Federal and local government and Iveco discussed a number of topics concerning platooning and autonomous driving.

Speakers included Belgium’s Federal Minister of Mobility, Jacqueline Galant, who spoke about the country’s approach to testing semi-automated vehicles; Dirk Quina, the Deputy Head of Cabinet for Belgium’s Chief State Secretary for Road Safety and ICT who addressed the usefulness of
technology for road safety; and Giandomenico Fioretti, Trucks Portfolio Management Director at Iveco who focused on Iveco’s role in the European Truck Platooning Challenge.

The overall objective of the European Truck Platooning Challenge is to accelerate the introduction of truck platoons by putting the subject high on the agenda of EU policy makers. The main event in Rotterdam on April 6 demonstrated the advantages of truck platooning with an aim to foster European cooperation between truck manufacturers, member states, logistics service providers, road operators, road and vehicle approval authorities, research institutes and governments.

Truck platooning is also part of the industry’s integrated approach to further reducing CO2 emissions. This approach examines all elements that affect emissions when operating a truck. Besides the vehicle itself, trailer design, the use of alternative fuels, logistics, infrastructure and intelligent transport systems (such as platooning) all play a decisive role in reducing CO2 emission levels.

View a video of the April 6 event.