Scania is testing the use of Ericsson's 5G networks which allow for higher bandwidth and low latency for improved machine communication capabilities. 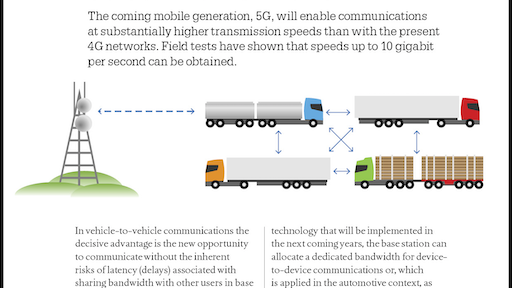 Scania has become the first company to test the communication giant’s new 5G technology components, as part of a collaboration between Scania and Ericsson Research exploring the use of 5G networks in transport communications.

The technology will feature prominently in trials of autonomous driving and connected vehicles. Three state-of-the-art mobile base stations have been installed at Scania’s R&D facility and the test network will be continuously updated with new technology as it is being developed.

Explains Anders Ställberg, Scania’s Project Manager for City Automation, “The new test network with its 5G components allows for a high quality mobile network service, with low-latency and high bandwidth, where a lot of complex data can be transferred very quickly and very reliably – providing us with a ‘priority communications lane’ when it comes to projects such as autonomous driving and platooning.” Having a ‘priority lane’ has sometimes been an issue in crowded pre-5G networks, where users have to jostle for space with those who are streaming films, music or games, for example. 5G will support many more instances of use than 4G networks – particularly in communication between machines.

For Scania, the low latency (delay) in 5G connections means that the new technology could be used by vehicles transmitting braking or directional information to each other, where speed and reliability are vital. It could also be used to help improve the reliability and speed of the exchange of the information between the two or more vehicles in a truck platoon. Where previously WLAN technology has been used, the 5G technology, with its guaranteed level of latency and bandwidth, could offer an alternative.

The new technology can also play a key role in tests of Scania’s autonomous vehicle system, such as self-driving vehicles continuously updating a map for autonomous driving, stored on a central server, for distribution to other vehicles in the system.

Both Scania and Ericsson feel that the 5G trials will prove to be of great value. Says Ställberg, “It allows Scania to further develop the capabilities underpinning our ongoing projects, while Ericsson fulfills its desire to test its new technology in a working, practical environment.”

Torbjörn Lundahl, Program Director for the 5G National Research Program at Ericsson Research, agrees. “We want to show other companies how 5G can enable and support the digital transformation of their industry. We hope to gain valuable insights and innovations that will pave the way for further digitalization, using 5G as an enabler. The trials with Scania will help us to understand the requirements to ensure they are met by the 5G standard and products, and deepens our experience with the transportation sector which is a focus industry for Ericsson.”

Looking ahead, the trials will not just be limited to the Södertälje testing facility. Scania will also have access to the 5G connection at Ericsson’s head office. In fact, Ericsson’s 5G test network in Kista was already used to trial smaller, self-driving buses at the end of April during Drive Sweden’s ‘Kista Mobility Week’. And, Kista will be the venue for future demos of autonomous vehicles for Scania’s city automation project.

DEUTZ is continuously developing and evolving its electric drive systems to meet the needs of various applications.
March 31, 2020