Kenworth has received funding for three projects aimed at the development of hybrid electric trucks; one version will use CNG for electrical power generation and the other a hydrogen fuel cell. 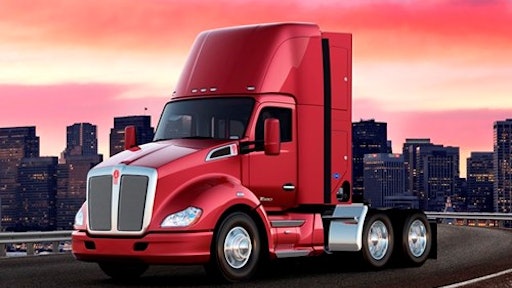 The first two projects are funded at $1.9 million each by the U.S. Department of Energy (DOE) Office of Energy Efficiency and Renewable Energy (EERE), with Southern California’s South Coast Air Quality Management District (SCAQMD) as the prime applicant. Kenworth will build two, proof-of-concept T680 Day Cab drayage tractors to transport freight from the Ports of Los Angeles and Long Beach to warehouses and railyards along the I-710 corridor in the Los Angeles basin.

The first T680 Day Cab will be a hybrid electric drayage truck producing near-zero- emissions utilizing a currently available compressed natural gas (CNG) engine to generate electrical power. The second T680 Day Cab will feature a hydrogen fuel cell offering true zero-emissions operation. These trucks are expected to be identical, except for their power generation systems. Both trucks will have an all-electric range of 30 miles, as well as on-board CNG and hydrogen capacity, respectively, of 100 diesel gallons equivalent.

The third project is funded at $4.8 million by the California Air Resources Board (CARB), again with the SCAQMD as the prime applicant. Kenworth will build four hybrid-electric T680 Day Cabs and support the customer field test of the units in Southern California drayage operations.

“Hybrid-electric powertrains are expected to be required within seven to 10 years to meet emissions requirements in several major metropolitan areas of the United States. Already California is considering regulations requiring port drayage trucks to run at zero-emission levels when operating in economically disadvantaged communities,” says Mike Dozier, Kenworth General Manager and PACCAR Vice President. “These T680 Day Cab projects are a great opportunity for Kenworth to advance the development of key technologies that may play a critical role in the trucks of the future.”

With its Trimble Dimensions event weeks away, Trimble revisits a list of its Greatest Hits from the past year, carting them to bauma for education and demonstrations.
Trimble
October 25, 2022
Follow Us