Scania Next Generation Trucks to Include Rollover Side Curtain Airbag

Scania will include rollover side curtain airbags in its new truck generation to help increase driver safety in the event of a rollover. 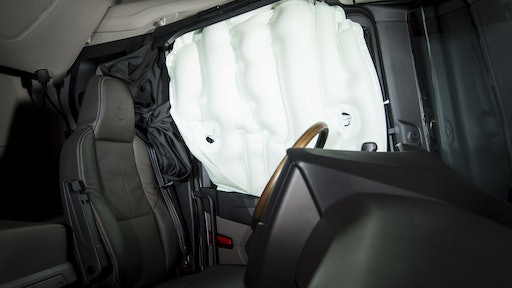 Scania’s new truck generation can be equipped with rollover side curtain airbags integrated into the headliner moulding above the doors – a unique solution which has never previously been offered in trucks. Scania’s rollover side curtain airbags provide significantly-enhanced protection for those travelling in the vehicle in the event of a rollover, one of the most serious types of truck accidents.

“The use of a seat belt is essential to allow the safety systems to do their job and to ensure that the driver is not thrown out of the cab,” says Christofer Karlsson, who is responsible for the development of Scania’s crash safety system. “Our rollover side curtain airbag – particularly when combined with the steering wheel airbag and our seat belt pretensioners – ensures that the driver and any passengers on board will have a much better chance of surviving a rollover accident in one of the new generation of Scania trucks, with far less severe consequences than would be the case in any other truck.”

Scania has developed both the active and passive safety features in the new truck generation, with a series of measures that protect those travelling in the cab. By offering rollover side curtain airbags, Scania believes there could be a significant reduction in the proportion of drivers who are killed in rollover accidents.

A common reason for trucks rolling over is that the driver is forced to carry out evasive action to avoid an oncoming vehicle or an obstruction. If the truck then ends up off the road, there is rarely sufficient load-bearing capacity, so the vehicle may topple onto its side or even roll right over at higher speeds. Advanced systems with sensors determine when and if the rollover side curtain airbags and any other airbags should be deployed; when deployed, the airbags inflate instantaneously.

Scania’s new and already widely-discussed truck generation will be unveiled online on the evening of August 23. The launch can be followed online at nextgenscania.com.

Scania Invests in Sweden Facilities to Prepare for Next Truck Generation