Bosch's VisionX concept study, and prototype truck, demonstrates the technologies of the future for trucking such as platooning, use of multiple assistance systems and hybrid technology. 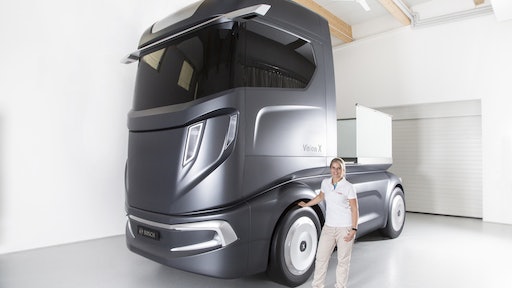 At the 66th IAA Commercial Vehicles trade fair, Bosch will be presenting a 40-ton smart device in the form of a truck tractor – all part of its VisionX concept study on the future of commercial vehicles. “Connected, electrified, and automated – that’s the future of trucks. And that’s what Bosch has encapsulated in VisionX,” says Dr. Markus Heyn, member of the board of management of Robert Bosch GmbH. One of the many technologies envisaged in VisionX is platooning. Besides making life easier for drivers on long journeys, this also represents a significant safety improvement. What’s more, platooning offers a major boost to transport efficiency.

In the future, multiple assistance systems will combine with automation to make trucks safer and more reliable – almost as if they were on rails. Vehicles will receive all the data they need in real time from the Bosch IoT Cloud, including information on their route, traffic congestion, detours, and the unloading facilities available at their destination. This lets them avoid downtime. What’s more, some aspects of driving will be taken over by the truck itself. For instance, once it reaches the freeway, it joins a platoon – a kind of freight train composed of trucks. In such a platoon, the truck is one of a number of trucks all following a lead vehicle to which they are electronically connected and linked. With the convoy members accelerating, braking and steering in sync, automated driving reaches a whole new level, increasing safety and taking the strain off drivers.

Read more about truck platooning in the article "Follow the Leader."

The driver steers the truck until it receives data identifying a suitable convoy. The same applies when the truck leaves the platoon to exit the freeway; at that point, the driver resumes control to complete the journey in manual or partially automated mode.

“Once the truck joins a convoy on the freeway, drivers can start planning their next route while still remaining in complete control. They can access all key information on the screens in their cab and take the wheel if they need to,” says Heyn. “Connected and automated trucks are the future, and we are looking to play a major part in their development.”

Increasing efficiency still further will continue to be a major focus in the future. That’s why the Bosch VisionX concept study takes the diesel engine – which is particularly economical in the world of heavy goods transport – and combines it with electric motors for auxiliary systems such as the hydraulic pump. Trucks of the future will benefit not only from this hybrid technology, but also from the advantages of convoying, which include improved safety thanks to coordinated braking, accelerating and steering, as well as a significant economic plus. “In a convoy, you can combine the safety gains of automated driving with the efficiency boost that is so crucial to the commercial vehicle sector,” says Heyn. “Slipstream driving enables fuel savings of up to 10%. That’s a strong argument in the commercial vehicle industry.”

VisionX as part of the connected logistics chain

“Perfectly connected like a smart device, the truck of the future will become a key component of international logistics processes,” states Heyn. Bosch’s new systems will make drivers’ lives easier in many ways – from accepting shipping documents and loading the truck, to carrying out automated maneuvers once the truck arrives at its destination. By accessing the Bosch IoT Cloud, hauliers and customers will be able to track where the truck and its cargo are located at any point in time. What’s more, drivers will be able to find and reserve parking spaces along the route, making the journey less stressful.

Innovation is in the details, too

Although a truck’s fuel consumption plays a key role in the total cost of ownership, other factors also play a major part, such as the losses incurred when trucks stand idle. The Bosch VisionX concept study shows how much scope there is for optimizing this situation in the future, too. For example, predictive maintenance can monitor the technical condition of a truck in real time and inform the freight forwarder of any maintenance work or repairs that are due. This is the best way to plan breaks in a truck’s schedule, thus keeping downtime to a minimum and further boosting transport efficiency.

What To Expect from the Latest Vanguard Power Solutions at WOC