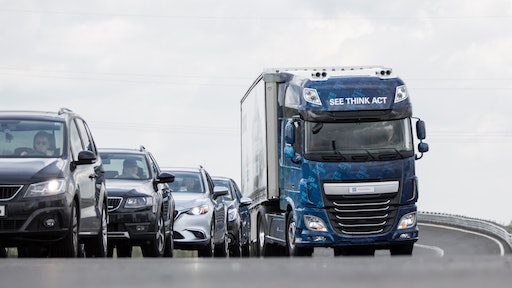 Systems like ZF's Evasive Maneuver Assist, developed with WABCO, can help prevent collisions by automatically steering the vehicle around hazardous areas and slowing it to a stop.
ZF Friedrichshafen AG

Equipping large trucks with forward collision warning and automatic emergency braking (AEB) systems could eliminate more than two out of five crashes in which a large truck rear-ends another vehicle, a new study from the Insurance Institute for Highway Safety (IIHS) suggests.

IIHS Director of Statistical Services Eric Teoh examined data on crashes per vehicle mile traveled from 62 carriers operating tractor-trailers and other trucks weighing at least 33,000 lbs. He found that trucks equipped with forward collision warning had 22% fewer crashes and trucks with AEB had 12% fewer crashes than those without either technology. Forward collision warning and AEB reduced rear-end crashes — the specific type of collision they’re designed to prevent — by 44 and 41%, respectively.

Although their drivers crash less often per mile traveled, large trucks can be especially deadly because they can weigh 20-30 times as much as passenger vehicles. U.S. crashes involving large trucks have risen by nearly a third since hitting an all-time low in 2009, killing 4,136 people in 2018. Among those fatalities, 119 deaths resulted from large trucks rear-ending passenger vehicles.

Overall, Teoh’s study covered some 2,000 crashes that occurred over more than 2 billion vehicle miles traveled during 2017-19. The analysis excluded incidents that weren’t serious enough to result in injury or significant property damage.

“This study provides evidence that forward collision warning and AEB greatly reduce crash risk for tractor-trailers and other large trucks,” Teoh says. “That’s important information for trucking companies and drivers who are weighing the costs and benefits of these options on their next vehicles.”

Front crash prevention systems use cameras, radar or other sensors to monitor the roadway ahead. Some include only forward collision warning, which alerts the driver to obstacles in the roadway. AEB systems go further — automatically applying the brakes to prevent the collision or reduce its severity.

The European Union has required AEB with forward collision warning on most new heavy trucks since November 2013.

In the U.S., neither truck nor passenger-vehicle manufacturers are required to equip vehicles with any kind of front crash prevention. However, 20 automakers that account for 99% of the U.S. market are moving toward making AEB standard on virtually all new passenger vehicles by Sept. 1, 2022, under a voluntary commitment brokered by IIHS and the National Highway Traffic Safety Administration.

For passenger vehicles, studies conducted by IIHS and the Highway Loss Data Institute have documented significant benefits from AEB. An IIHS study of police-reported crashes showed that front AEB cuts rear-end crash rates in half and rear-end crashes involving injuries by 56 percent. Meanwhile, HLDI has found that AEB cuts property damage liability claims, as well as claims for injuries to people in other vehicles.

The number of large trucks equipped with AEB has been increasing, but there have been few studies of its effect on crash rates.

For the first time, the Institute drew on data compiled by SmartDrive Systems, a video-based safety program for commercial fleets. SmartDrive was able to determine which trucks were equipped with forward collision warning and AEB and collect detailed information about crashes. Using data collected by a third party helped to minimize data differences among carriers that might have influenced the results.

“The transportation intelligence we’ve gathered over the past 15 years provides unique and deep insights on the trucking industry,” says Jason Palmer, Chief Operating Officer of SmartDrive Systems. “We’re proud to put this data to use to support IIHS with this important and timely study of the benefits of front crash prevention.”

The similar benefits of forward collision warning and AEB that Teoh observed for rear-end crashes were unexpected, since studies of passenger vehicles have shown AEB to be much more effective than systems that only issue warnings. That could reflect differences in how and by whom trucks and passenger vehicles are driven, or it might be connected to variations among the specific systems used by each carrier.

The study indicated that AEB and forward collision warning are both likely to have benefits beyond the reduction in crashes. Some crashes that aren’t prevented by the systems are made less severe, thanks to a reduction in impact speed. This is true whether it’s the automated system applying the brakes or a human driver who has more time to react because of a warning.

In reviewing the trucks that rear-ended other vehicles, Teoh found that either system resulted in speed reductions of more than 50% between the warning or automatic braking and the impact.

“The potential benefits are great enough that these crash avoidance systems should be standard equipment on all new large trucks,” says IIHS President David Harkey.