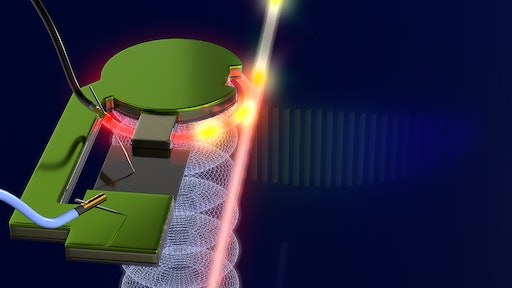 A self-driving vehicle can have a hard time recognizing the difference between a person and a brown bag that suddenly appears into view because of limitations in how it senses objects using lidar.

The autonomous vehicle industry is exploring “frequency modulated continuous wave” (FMCW) lidar to solve this problem. Researchers have built a way that this type of lidar could achieve higher-resolution detection of nearby fast-moving objects through mechanical control and modulation of light on a silicon chip.

The work, published in Nature, was conducted by the OxideMEMS lab at Purdue University and the Laboratory of Photonics and Quantum Measurements at École polytechnique fédérale de Lausanne (EPFL), a research institute and university in Lausanne, Switzerland.

FMCW lidar detects objects by scanning laser light from the top of an autonomous vehicle. A single laser beam splits into a comb of other wavelengths, called a microcomb, to scan an area. Light bounces off of an object and goes to the detector through an optical isolator or circulator, which ensures all reflected light ends up at the detector array.

What Purdue and EPFL researchers developed uses acoustic waves to enable faster tuning of these components, which could bring higher-resolution FMCW lidar detection of nearby objects.

The technology integrates microelectromechanical systems (MEMS) transducers made of aluminum nitride to modulate the microcomb at high frequencies ranging from megahertz to gigahertz. The optical isolator that the team developed as part of this process is further described in a paper published in Nature Communications.

An array of phased MEMS transducers, also used in cellphones to discern cellular bands, stirs light at gigahertz frequencies by launching a corkscrew-like stress wave into a silicon chip.

“The stirring motion modulates light such that it can only travel in one direction,” says Sunil Bhave, a Purdue professor of electrical and computer engineering.

Hao Tian, a Purdue Ph.D. candidate in electrical and computer engineering, built the MEMS transducers at the Scifres Nanofabrication Facility of Purdue’s Birck Nanotechnology Center in Discovery Park. He integrated the transducers with a silicon nitride photonics wafer developed at EPFL.

“The tight vertical confinement of the bulk acoustic waves prevents cross-talk and allows for close placement of the actuators,” Tian says.

Other transducers in the same technology excite an acoustic wave that shakes the chip at megahertz frequencies, demonstrating sub-microsecond control and tuning of the laser pulse microcomb or soliton.

“This achievement, bridging integrated photonics, MEMS engineering and nonlinear optics, represents a new milestone for the emerging chip-based microcomb technology,” says Junqiu Liu, the first author on the Nature paper who leads the fabrication of silicon nitride photonics chips at the EPFL Center of MicroNanoTechnology.

This light modulation technique not only integrates mechanics with optics, but also the fabrication processes involved, making the technology more commercially viable, the researchers said. The MEMS transducers are simply fabricated on top of the silicon nitride photonics wafer with minimal processing.

“As yet unforeseen applications will follow up across multiple communities,” says Tobias Kippenberg, a professor of physics at EPFL. “It’s been shown time and again that hybrid systems can obtain advantages and functionality beyond those attained with individual constituents.”

According to the researchers, the new technology could provide the impetus for microcomb applications in power-critical systems such as in space, data centers and portable atomic clocks, or in extreme environments such as those with cryogenic temperatures.

“Our results would not have been possible without this multidisciplinary and intercontinental collaboration,” Bhave says.

The work at Purdue is funded by the Defense Advanced Research Projects Agency and the National Science Foundation.

The new 959CT Linear Displacement Transducer is designed for the OEM market in industries which utilize hydraulic cylinders.
AMETEK Factory Automation
May 15, 2021
Follow Us