The Collision Avoidance System Interface, when coupled with a Proximity Detection System, helps to detect objects in the collision risk area to improve safety in underground mining. 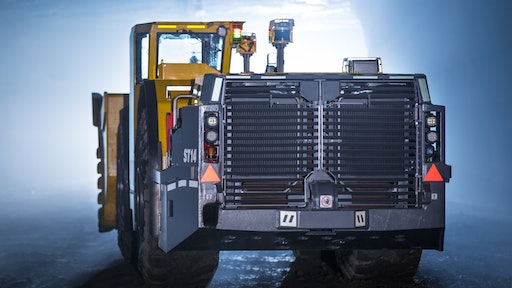 The CAS is designed to help improve safety in underground mining applications.
Epiroc

Proximity Detection System (PDS) suppliers, who are compliant to the ISO 21815-2 Draft (March 2018) are able to interface with an Epiroc RCS Materials Handling TMM (Trackless Mobile Machinery) to enable functionality for slowing and stopping, in what the PDS perceives to be a hazardous or unwanted event.

The interface allows for third party systems to communicate with Epiroc’s Rig Control System, RCS, in a completely new way. This enables a third party PDS added to the vehicle, when needed, takes interventional control of the machine to prevent accidents.

The Collision Avoidance System (CAS) Interface, when coupled with a PDS, helps to detect objects in the collision risk area, evaluate the collision risk level and take interventional actions to avoid the potential collision. The system works on the understanding that all machines and all persons in the mine are equipped with tags or sensors. A CAS installation is intended to assist with operator perception of potential hazards around the machine and prevention of potential incidents where operators cannot respond in time, however the overall responsibility for safe operation of the machine remains with the operator.

“With safety first and always in mind, I am proud to see the release of the Collision Avoidance System interface. This improves safety underground in a groundbreaking way,” says Daniel Sandström, Global Product Manager-Minetruck, in Epiroc’s Underground division.

The CAS interface is now released and can be ordered for the complete Epiroc RCS Loader fleet as well as for Minetruck MT42 and soon thereafter for the Minetruck MT65. Customers have been pleased with the performance and functionality of the Epiroc CAS Interface and are beginning to grasp the magnitude of the work involved in implementing such a system.

“The Epiroc RCS Collision Avoidance interface performed as designed, demonstrating high consistency in the cases where the Proximity Detection Systems (PDS) provided reliable input signals,” says Kumeshan Naidu, Integration Manager M&A, at Epiroc’s Technology and Digital division, and continues: “The CAS initiative is not a “Plug and Play” solution and must be tailored, with the participation of all parties to suite a particular site. Change Management and Risk Mitigation Strategies on these sites are key when implementing the system.”

Moving forward, Kumeshan Naidu can see further potential: “Solutions like Mobilaris On-Board can augment a mine’s efforts to ensure safety, as well as create a more “natural” state of awareness that underground TMM operators can respond to. With an interface that is more familiar to the operator, who typically drives commercial vehicles (GPS, Waze, Google Maps), their reflex is to naturally avoid a potential unwanted event from occurring. An operator or pedestrian that is equipped with real time information about their surroundings, through systems like Mobilaris’s MMI, On-board and Pocket Mine, will be better suited to promote a safe working environment. One in which the CAS slow down and stop functionality is a last resort in preventing collision events.”

Epiroc is part of the ISO standard working group where new standards are being developed. Epiroc is also participating in the International Council for Mining and Metals (ICMM) initiative for Vehicle Interaction. Epiroc will change the interface from supporting ISO 21815-2 draft (March 2018) to further supporting the final version of ISO 21815-2 within in a year after ISO 21815-2 being released.