API Technologies showcased its line of Spectrum Sensors, which include rugged temperature sensors, at AHR Expo 2012. 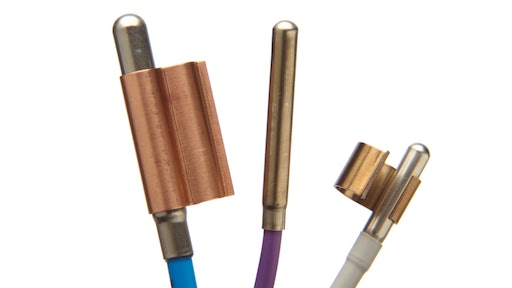 "This year we will be highlighting our line of rugged temperature sensors which provide excellent thermal tracking in even the most daunting environments," says Larry Howanitz, Vice President, Spectrum Sensors Product Group of API Technologies. "They are ideal for high moisture applications when there is a continuous freeze/thaw cycle - such as HVAC, food and beverage, and refrigeration systems." These rugged sensors operate over a temperature range of -40 to 105 C.

The Spectrum Sensor line of rugged temperature sensors is available in both 1/4 in. O.D. and 3/16 in. O.D. tube sizes. They come in a wide variety of sensor curves and resistances (including thermistor and RTD), as well as in various cable lengths and terminations. These sensors can also be combined with clip sizes from 3/8 in. to 7/8 in. to create an easily mountable sensor for measuring temperature on straight or bent tubing.

In addition to its rugged temperature sensors, API will also showcase its full line of temperature sensing probes and assemblies for HVAC and refrigeration applications as well as PTC and NTC thermistor components.

The ADR Battery Disconnect Switch connects and disconnects the electric circuit to and from the battery.
Littelfuse Inc.
May 8, 2021

The POSITAL IXARC magnetic absolute rotary encoders are available in a wide range of mechanical configurations, with multiple options for housing and flanges.
POSITAL Inc.
May 5, 2021

Growing use of radar sensors in various applications including infrastructure and robotics will increase their market value reports Global Market Insights.
Sara Jensen
April 19, 2021
Follow Us