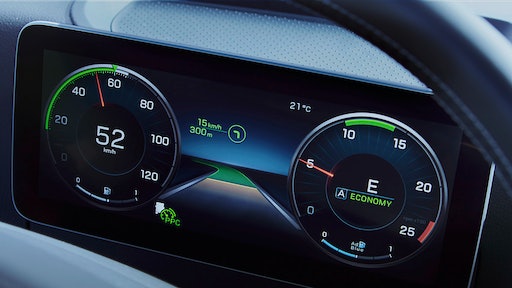 The fuel consumption of Mercedes-Benz heavy-duty trucks is being steadily reduced. The new Actros, for example, consumes up to 3% less diesel on major roads and motorways than its predecessor, which was already extremely frugal. On cross-country roads the fuel reduction can be as much as 5%.

One major reason for this economy is the optimization of cruise control, transmission and engine control thanks to the further improved Predictive Powertrain Control (PPC). In the following, Prof. Dr. Uwe Baake, Head of Product Development Mercedes-Benz Trucks, explains how this system works, what effects it has and how it is used.

What is the aim of PPC?

The overall aim of PPC is for the truck to save as much fuel as possible, and to support the driver in the best possible way. The system automatically takes topography, the course of roads and traffic signs into account. This means that unnecessary braking, accelerating and gear shifting are avoided, and fuel can be used optimally. The driving style of PPC is often more economical on fuel than a professional driver can be – even where the driver knows the route and the performance of the truck really well.

How much fuel can be saved with PPC?

The intelligent cruise control and transmission control system saves an average of up to five percent fuel compared with vehicles not equipped with PPC. The system was last improved once again when the new Actros was introduced. There were two clear advantages: first, even on cross-country and out-of-town routes, PPC provides fuel advantages, meaning consumption that is up to five percent lower. Secondly, the performance of the system was improved even further on motorways and major roads. Operating the new PPC alone can mean an additional reduction in consumption of 1.5% compared with the predecessor version.

Where does PPC get its information from?

The system "knows" more than 95% of all European cross-country and trunk roads. It links current GPS information about the precise location of the truck with stored digital 3D road maps and thus calculates a type of "electronic horizon" which the driving style of the truck is then automatically adapted to. In doing so, PPC calculates the direction and the topography of the road so as to plan gear shifts and their timing in advance and to adjust the speed via cruise control predictively. At the same time, the system constantly uses the information from Proximity Control Assist, so that the behavior of vehicles ahead can be factored in to the fuel-optimized control of the drivetrain.

How does PPC work on motorways and major roads?

By means of a number of intelligent measures, PPC reduces fuel consumption on motorways and major roads: for example, the system continuously optimizes the EcoRoll mode of the automatic transmission to use the vehicle's momentum in the best possible way. The system dispenses with acceleration if the truck can soon reach the speed set by cruise control just by coasting. Also, the intelligent cruise control and transmission control use the momentum on downhill stretches by automatically adapting the speed. The system exceeds the set speed (upper hysteresis) of the cruise control for a maximum of 40 seconds to allow the truck to make use of its momentum on the subsequent uphill gradient. Also, before the downhill stretch, PPC selects the gear which ensures optimum use of the continuous brake, thus going easy on the service brake – an advantage particularly for heavy trucks travelling downhill. Before an uphill gradient, the system decides automatically if a gear downshift is required. At the end of the ascent, the output is adapted once again, because PPC can detect in advance before reaching the brow of the hill whether the truck has sufficient speed to roll over the brow. If it does, it tolerates a temporary slowdown to a speed lower than the speed set in the cruise control.

How do PPC and Proximity Control Assist work together?

Thanks to the new, pre-emptive distance regulation, PPC optimizes the vehicle behavior when autonomous intelligent cruise control is active. The system observes the vehicle ahead and takes it into consideration when calculating future coasting phases. This means that PPC can optimally plan gearshifts and speed progression in order to use the vehicle's momentum in the best possible way. The system ensures, for example, that the truck can drop back early if a vehicle ahead forces it to slow down.

How does PPC work on cross-country roads?

The clever mechanisms of PPC on motorways and major roads can now also be applied on out-of-town roads, ever since the new Actros was introduced. Also, the system not only takes gradients, brows of hills and downhill slopes into account, but also factors in the radius of bends, speed limits and priority rules at junctions. Up until now, it was not advisable to drive with cruise control on cross-country roads, because there were too many different traffic situations that made it necessary to intervene manually. Now, however, thanks to even further improvements in PPC, drivers can use cruise control here too – a real improvement in driving comfort that reduces stress and also fuel consumption by up to five percent. Thanks to high-precision maps, PPC "knows" speed limits that lie ahead and route events such as bends, roundabouts and junctions, and it takes stop signs and give-way signs into account. Even when the driver cannot yet recognize these things himself or herself, the system lets the vehicle coast in time to ensure maximum use of energy, or adjusts the speed and gear selection predictively so as to economize on fuel to the greatest possible extent.

How is the operation of PPC displayed to the driver?

As soon as the driver has activated cruise control or adaptive cruise control by means of the left-hand steering wheel buttons and the truck has reached a speed of 15 km/h, with the new Actros and the new Arocs, PPC is automatically activated. The white PPC symbol now appears in the primary display. If the system actively takes over control of the drivetrain, the colour of the PPC symbol changes to green. Also, graphics are shown which announce route events ahead, such as bends, roundabouts and junctions, and also speed limits.

How is PPC operated?

PPC automatically starts operating when the driver activates cruise control or adaptive cruise control by means of the left-hand steering wheel buttons. Now the driver can use the "Systems" menu to set the upper speed tolerance for coasting phases in the range of 2 to 15 km/h, depending on the selected drive program. The lower speed tolerance can be set between -1 and -10 km/h. Also, the driver can set the speed from which PPC should begin to adjust the speed to a bend, in the "Cruise control settings" menu. Coasting towards route events such as stop or give-way signs can be set here too. The settings of Proximity Control Assist are also important for PPC: when starting the engine, the middle reference distance is set automatically. The driver can then however set the distance in five steps to suit his or her requirements, but must always make sure that the truck maintains the legally required minimum distance to the vehicle ahead.

How can the driver stop PPC operating?

PPC becomes active in the background without driver confirmation as soon as cruise control is activated and a valid visible horizon can be determined. If the driver does not agree with the speed selection made by PPC, he or she can override the system at any time, for example by operating the brake or the accelerator pedal. Also, the driver has the option of completely deactivating PPC in the "PPC settings" menu in the secondary display of the multimedia cockpit.

Which vehicles is PPC available for?

PPC is available for most configurations of the new Actros and the new Arocs. The last vehicles to be added to the PPC program were heavy duty trucks up to 120 tonnes, all-wheel drive vehicles and vehicles with Hydraulic Auxiliary Drive (HAD) or turbo retarder clutch.

Using GPS functionality on construction equipment to automate tasks is becoming more common, and some OEMs have made these features standard on new equipment.
Volvo Construction Equipment
October 3, 2022
Follow Us