Active Drive Assist is an active driving assistance system which can accelerate, brake and steer without driver intervention. 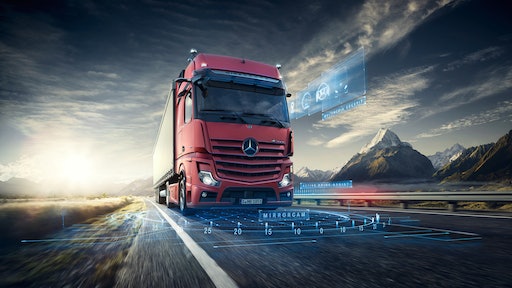 The highlights at the Mercedes-Benz bauma stand are the new Actros and Arocs truck series, which set standards in terms of safety, efficiency and performance. Especially the new generation of the Actros proves to be a bright little mind and appears twice at bauma. With it, Mercedes-Benz Trucks is bringing semi-automated driving in all speed ranges into series production. Active Drive Assist – ADA for short – forms the basis for this. This active driving assistance system can accelerate, brake and steer without driver intervention. This removes strain from the driver, enhances comfort and increases road safety.

The ADA is a further development based on the existing functions Distance Warning Assist, Lane Keeping Assist and Emergency Brake Assist. With the fusion of radar and camera data, this truck can independently drive in a straight line, keeping in its lane and regulating the distance to other vehicles as it does so. Thanks to the new electrohydraulically-assisted Servotwin steering system, the Actros actively stays in lane. The new active lane-assistant warns both visually and acoustically as well as actively steering the truck back into its lane. The prerequisite for this is a lane from 3.20 m to 4 m wide with highly visible lane markings on both sides. Important for safety: Active lane assistant is maintained even if the driver has deactivated Active Drive Assist.

Outwardly, the new Actros differs from its predecessor by the absence of exterior mirrors. A camera system called MirrorCam replaces rear-view and wide-angle mirrors. Two cameras mounted on the outside of the cab's roof frame provide a view to the rear and transmit the image to two 15-in. color displays, mounted on either side of the cab's A-pillars. The MirrorCam, standard equipment for the Actros, improves all-round visibility, handling, aerodynamics and safety and allows a night check along the sides of the vehicle towards the rear when the curtains are drawn. The MirrorCam is also available for the Arocs as an option (series in Europe for Actros).

Active Brake Assist 5 supports the driver if there is an imminent risk of a rear-end collision or running into a pedestrian. ABA 5 can detect people walking ahead of the vehicle and, if necessary, automatically initiate emergency braking right down to a standstill. It doesn't matter whether the person is crossing the road, coming towards the truck on the road or walking in the driving direction.

Daimler engineers have further refined the standard Predictive Powertrain Control (PPC) cruise control and transmission-control system and equipped it with extended map material. This now also enables the use of the predictive cruise control system on inter-city routes. In addition to topographical data, the system also accesses information on curves, roundabouts, junction characteristics and traffic signs and adjusts the gearshift strategy, momentum and rolling phases accordingly. The improved aerodynamics thanks to MirrorCam, the modified side deflectors and a higher rear-axle transmission ratio in the Actros mean that fuel consumption has been further reduced compared to the predecessor. Fuel savings of up to three percent on motorways and up to five percent for the Actros in distribution-duty and Arocs are possible.

The completely redesigned multimedia cockpit in the Actros and Arocs offers the driver a unique and convenient display and operating concept. Instead of classic instruments, the driver looks at two large, free-standing displays on which everything of relevance is presented. The standard, interactive screens serve as a central source of information in the digital driver's workplace of the future. Their operation is for the most part as intuitive as that of a smartphone. In addition to all driver-relevant basic information, they also allow visualisation of the assistance systems' operation. A new feature is traffic sign recognition in conjunction with the new truck navigation system using a high-resolution front-mounted camera. Speed limits and other traffic signs are shown in good time on the primary display.

On the exterior, the absence of conventional exterior mirrors makes the Actros and Arocs (optionally) appear proportionally even more homogeneous. During the day, the likewise new, standard LED daytime running lights help ensure that the Actros is as conspicuous as possible for other road users. The new Light System also represents a major step forward in terms of safety. It includes, in addition to the LED daytime running lights, an automatic switching function between low beam and high beam, as well as an automatic cornering light and foglamps.

The new interior lighting concept takes into account the importance of light for the driver's fitness and well-being. It now provides optimum lighting for the cab in practically any situation and is available in three versions. The standard version can fully illuminate the cab and offers two warm-white reading spotlights. For better orientation while driving, there is a discreet blue night driving light. The new, optionally available LED ambient lighting provides an even more homely illumination of the interior. For example, an additional ambient night-time driving light is available that illuminates the footwell and the dashboard in blue. A living-area light in amber creates a cosy atmosphere in the living area. The associated light alarm clock is a further enhancement to comfort on-board.