Military telematics: Afar, and at home

Avoiding confusion amidst chaos with telematics 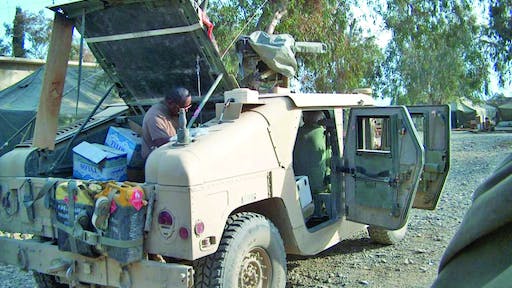 A technician servicing/installing the system, working inside the right rear quarter of the vehicle.

Ever since armies have opposed one another in organized combat, there has been the very real, and very problematic phenomenon known as the ‘Fog of War’. When armies engage, the result is a tendency toward miscommunication, disorder, and confusion. The ensuing chaos serves only to frustrate the ability of commanders to know what’s going on in the field, where their forces are engaged, where the enemy is and what he’s doing. Communications break down. The Fog of War has been particularly frustrating even in modern times, and has defied, rather successfully, attempts to alleviate it; yet the advantage will always go to the army with superior communications, real-time intelligence, and the ability to direct forces without ambiguity. As with the development of many helpful technologies that began with war, so has it also been with telematics, which provide the ability to commanders to not only communicate with their troops, armored units, and aircraft, but direct them, gather intelligence, attack targets, and ultimately lift the veil of the Fog of War.

Soldiers in battle carry ruggedized notebook computers that facilitate 2-way communication with command, help direct fire, help command assess troop strength and deployment, and perform many other tasks including relay the soldier’s physical condition. Telematics in armored vehicles and aircraft perform similar functions and allow the deployment and effective use of unmanned vehicles. As the age of WWII-style battles fades into history and is replaced by irregular warfare techniques, constant real-time communication and remote direction of materiel becomes ever more important. One example of telematics systems on the battlefield is Blue Force Tracking.

Blue Force Tracking (BFT) is the US military term used to denote a command and control system that provides military commanders and forces with location information about friendly (and despite its name, also about hostile) military forces. In military symbolism, the color blue is typically used to designate friendly forces while red is used for enemies, and green or yellow are used for neutral forces.[1]

The system continually transmits locations over the FBCB2 network. It then monitors the location and progress of friendly (and enemy) forces, and sends those specific coordinates to a central location called the Army Tactical Operations Center. There the data are consolidated into a common operational picture, or COP, and sent to numerous destinations, such as the headquarters element, other in-theater forces, or back out to other military units for situational awareness.

Telematics has made possible the development of modern UAVs – or Unmanned Aerial Vehicles, the most familiar type being the Predator Drones. These attack and surveillance vehicles are aircraft flown by a pilot or a navigator (now called Combat Systems Officer) depending on the different Air Forces; however, without a human crew on board the aircraft. There are a wide variety of UAV shapes, sizes, configurations, and characteristics.

Currently, military UAVs perform reconnaissance as well as attack missions. UAVs are also used in a small but growing number of civil applications, such as firefighting or nonmilitary security work, such as surveillance of pipelines. UAVs are often preferred for missions that are too "dull, dirty, or dangerous" for manned aircraft.

UAVs are fed commands and communication by satellite, usually from control stations in the U.S. The system is not foolproof, however; a high number of crashes of these expensive ($4+ million each) unmanned weapons has been attributed to human error and insufficient operator training. The military can continuously operate Predator and Reaper surveillance planes, and each crew consists of a pilot, who is an officer, and a sensor operator, who is an enlisted airman responsible for running the plane's cameras and weapons.

Increasingly, military systems using telematics, developed for distant battlefields, are being applied successfully to applications here at home, to enhance border security, assist fire and rescue operations, and even enhance the electrical grid efficiency and usage on U.S. Military bases.

In late 2007, global positioning system devices used by thousands of soldiers worldwide began to be sold commercially by defense contractor Rockwell Collins Inc., according to Business Week. The Polaris-branded devices to be sold to customers, such as those in homeland security and search and rescue agencies, offered the same functions and durability of the military versions, the company said. The Polaris Guide is a GPS receiver that can be mounted in a vehicle or hand-held, and was made available for use in any federal, civilian, military, or international platforms. Militarized and rugged, they are intended to be used to patrol borders and monitor seaports, lakes, and rivers. The receivers can also be used to assist in disaster response and search and rescue operations.[3]

Rockwell Collins also released a helmet-mounted GPS navigation system for parachutists; named ParaNav, it is a personal, GPS-based, flight management system with an integrated head-up display. It provides parachutists with accurate navigation capabilities and enhanced situational awareness, allowing them to fly to their designated landing zones.

Federal cars and trucks are increasingly being outfitted with smart technologies that can record virtually everything a driver does with a vehicle, including speed, destinations, and driving style, e.g., how often he makes sudden stops, even when he’s swerving frequently between lanes.

GSA and the Marine Corps first tested these technologies in 2003, their adoption has grown considerably, according to Federal Times. The Marine Corps requires all of its recruiters to drive in cars with this tracking technology. Others have had it installed on their vehicles, including the Naval Criminal Investigative Service, the U.S. District Court in Middle Tennessee, the Army’s Tank-automotive and Armaments Command, and organizations in the Justice, Veterans Affairs, and Homeland Security departments.

In another example of military systems now being applied to applications on the home front, in September 2010, U.S. Department of Homeland Security (DHS) Secretary Janet Napolitano announced that Predator Unmanned Aerial System (UAS) flights would deploy out of Corpus Christi, Texas, to cover the Southwest Border—from the El Centro Sector in California all the way to the Gulf of Mexico in Texas—providing critical aerial surveillance assistance to personnel on the ground.[4]

Telematics products and systems are advancing the science of warfare in ways that track and control fighting units, organize and coordinate forces in the field, and make the use of mechanized units more effective and thus reduce the need for ground troops, reducing the potential human casualties on the side of the army using this technology. War is hell, it has been observed, but the use of the powerful new technologies of telematics may serve to make that hell as brief as possible, making military action more effective, and less costly in terms of material and lives. Seeing through the fog of war creates a tremendous tactical advantage to the army that has such a capability.

The way telematics systems collect and share information will continue to evolve and aid the transition toward more intelligent machine operation and care.
Sara Jensen
April 14, 2020

A new Data Brokerage service, the ZTR M7 advanced telematics solution, and the new ONE i3 interactive dashboard are among the products ZTR is introducing at CONEXPO 2020.
ZTR Control Systems
March 9, 2020

CES 2020 provided manufacturers in the heavy-duty equipment and vehicle industries the opportunity to showcase their latest innovations including automation, electrification and smart system advancements.
Sara Jensen
January 17, 2020
Follow Us