Using existing technologies in its product portfolio, one component manufacturer develops a concept truck capable of remote operation via a mobile app. 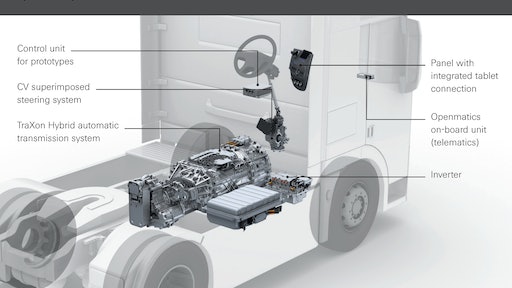 For the Innovation Truck, ZF used existing components from its various product lines and brought them together into one harmonized system.

Incorporation of autonomous vehicle capabilities continues to increase in various applications as a means of increasing productivity and safety. The heavy-duty commercial vehicle industry is one of many in which autonomous vehicle operation is beginning to grow. In 2014, ZF Friedrichshafen AG unveiled its ZF Innovation Truck which enables remote operation and full-electric driving of a truck during docking operations.

The Innovation Truck allows operators to park a trailer by directing the trailer and controlling the steering function via a mobile app on a tablet that communicates wirelessly with the truck. Users simply have to place their finger on the image of the truck displayed by the app and drag the trailer left or right to make the truck move in the direction they want.

“We saw a lot of the focus on autonomous driving and things like that were going towards the highway perspective,” says Bryan Johnson, Senior Manager of Corporate Communications at ZF North America Inc. “[The company] saw the need in a different perspective, in a logistics type environment—a shipyard or a truck yard—where you have a lot of costs involved in the maneuvering and storage of trucks at docks.”

In addition to helping eliminate the chance of accidents due to driver error, lead times can also be improved. The mobile app makes it easier for drivers to park their vehicles because of the visibility around the vehicle and surrounding area it provides, as well as its ease of use. Drivers can sit inside the cab or step outside of it to get an even better view of the surrounding area while reversing the truck. All of these capabilities can help make the trailer-parking process go faster for drivers and thus improve their productivity. And in theory, Johnson says a driver could pull into a dock or ship yard and hand the system’s tablet to a worker there who parks the truck and trailer while the driver takes a rest period or heads back to base in another, already emptied truck, helping further improve productivity.

ZF previously investigated a similar project for passenger vehicles in which a tablet application could be used to reverse a car with a trailer attached to it into position. The idea was to eliminate the need for a spotter during these reversing tasks, such as backing a trailer carrying a boat into the water which generally requires the help of a second person to guide the driver.

For the Innovation Truck, ZF first looked at possible and suitable functions from the passenger car system and then at what business units within the company could come together to work on the project. ZF did not create new products for the project, other than the algorithms and computing software necessary for controlling the truck; instead it looked at how its current technologies could be implemented in the truck. “Every aspect of the truck [uses] an existing component,” says Johnson. “By bringing all of it together we were able to see what the potential of our current technology is worth.”

A key part of what allows autonomous operation of the Innovation Truck is the wireless communication provided by Openmatics’ Bluetooth-enabled telematics system. Openmatics, a ZF subsidiary, utilizes tiny Bluetooth low energy radio chips in its system to collect data on the truck’s angles of articulation and wirelessly pass this information along to the electronics system. An electronic control unit at the front of the truck manages all of the data collected by the telematics system and sends the necessary commands to the transmission, steering and brakes during remote-controlled operation.

Vehicle control is provided by a tablet app that wirelessly communicates with the truck via Bluetooth. The app controls the trailer in reverse and truck steering when moving forward by telling the steering system how much it needs to steer in each direction in order to place the trailer in the correct position. Use of a superimposed steering system guides the truck’s front wheels so that the trailer immediately moves in the direction specified on the tablet.

Movement of the vehicle is accomplished with the touch of a finger by tapping and dragging an image of the truck shown on the tablet screen in the direction it needs to go. “All you’re doing is moving the trailer back and forth, left and right, on the screen and it’s positioning the trailer in place,” says Johnson. And the moment users remove their finger from the tablet, the truck stops. It will only move as long as a finger is on the tablet; otherwise it is in the parked position.

Buttons for driving and speed modes are included on the app screen. Icons of a hare, tortoise and snail are used to indicate the truck’s three maneuvering speed options, with the hare representing the fastest speed the truck can go; maximum reversal speed is 2.5 mph. The drive, neutral and reverse buttons are used to choose which portion of the truck to control. If a user selects the drive button, the cab of the truck will illuminate in yellow on the screen to indicate its movement is now being controlled. The maneuvering app also displays various points of view from truck-mounted cameras which Openmatics programmed to communicate wirelessly with the tablet. This enables drivers to see any obstacles or other vehicles that may be in their path.

For more efficient operation, ZF integrated its TraXon hybrid automated transmission into the Innovation Truck. The transmission has a modular design to allow flexibility in the types of start-up devices it uses. A hybrid version featuring a 120 kW electric motor was chosen for the truck to allow full-electric, zero-emission operation when being remotely controlled. The motor collects and stores energy that is used to power the truck, eliminating fuel use and emissions completely during remote operation. This is particularly beneficial if working in space-constrained areas to protect the health of workers, as well as meet potential emissions requirements. Additionally, the transmission’s electric motor can help reduce fuel consumption during longer distance driving by providing support to the diesel engine.

ZF added a second trailer to the Innovation Truck in order to demonstrate how much easier trailer-docking operations can be when using the tablet and maneuvering app. Though a more extreme example of the types of trucks this technology can be used on, Johnson notes two-trailer trucks are somewhat popular in Germany and extremely difficult to back up. “Only expert drivers can really pivot the two different points to get the truck in the right spot,” he says. However, with the camera views the app provides and the driver’s ability to remotely control the truck from outside the operator cab, even a novice could reverse this type of two-trailer truck into place.

Johnson adds there is a small learning curve, but it’s mostly associated with finding the right speed at which to drive the truck. Otherwise, it’s a relatively intuitive process. “It’s a lot safer than trying to drive one yourself,” he says. “You have a lot more room for control, and better control of the vehicle while maneuvering it in place.”

The future is autonomous

Development of the ZF Innovation Truck was meant as a capabilities project to see where the company is going with its technology. “The understanding was that we’re always trying to find ways to push the company and try new, innovative ideas,” Johnson explains.

One of ZF’s main focal points for the future is autonomous driving. Development of the Innovation Truck helped the company to see what technologies it has, and which are still needed, to continue progressing along the path towards autonomy. In addition, its acquisition this year of TRW Automotive Corp.—a supplier of active and passive safety technologies—will better position ZF to be a major player in the autonomous vehicle market. “The combination of ZF’s hybrid technology and TRW’s camera, braking and sensor technology, along with Openmatics telematics provides us with a great opportunity for the future,” says Johnson.

A growing number of autonomous vehicles

The amount of on- and off-road vehicles with autonomous capabilities, or those under development, continues to grow. Head to www.oemoffhighway.com to read about some of the most recent announcements in this market segment.