MOBA's Vision 3D system is being used for the first time at a construction site in New Zealand, adding to the system's growing global use. 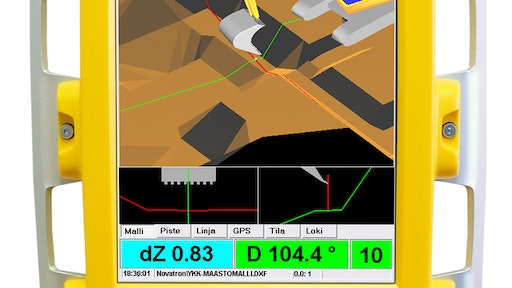 Whether Finland, Sweden or Germany – in Europe, MOBA Mobile Automation AG excavation systems are already being deployed in numerous countries. Since June of 2012, the high-end system Vision 3D is now for the first time being put to work at a construction site in New Zealand.

"The precision of the system, its ease of operation and the large monitor screen," are the main advantages that Louie Schutte, Technical Manager of the contracting client Synergy Positioning, states as to why he is convinced by the performance of the Vision 3D excavation system. The high-end system offers comprehensive 3D functionality with which complex projects can also be accomplished trouble-free.

The system, in use for the first time in New Zealand, was mounted on a Sumitomo excavator near Auckland in the spring of 2012. The installation took about a week altogether, including training on the Sumitomo model DH 350. End-customer A&R Earthmovers Ltd. is deploying the excavator in multi-shift operation to build a new industrial site, with a size of roughly 200 hectares, close to New Zealand's biggest agglomeration area Auckland.

"The project model created on a PC was supposed to be transferred to the machine. However, the volume of data was much too large for transmission via an Internet connection. We were able to resolve this quickly and easily by means of Telesupport, which is offered for the Vision 3D," explains Burkhard Mayer, MOBA Sales Manager. In doing this, Telesupport reduced the volume of data of the model. Subsequently, the transfer to the machine and processing with Vision 3D were possible without any problems. The system accepts all common data formats, so that time-consuming conversions are eliminated.

With the GNSS positioning, which is made even more exact - with centimeter precision – by using RTK (Real Time Kinematics), the precise position of the excavator and bucket is known at all times. This localization via satellite enables high-precision, efficient work.

The position data, as well as the incline and height differences vis-à-vis the reference area, are shown to the operator in real-time on the 8.4 in. display. On the basis of this display, the excavator operator can track the bucket in the 3D model and precisely steer it. With the visualization of the work steps, it is also possible to work precisely under water. The sturdy sensors that measure the incline angle on three axes are also suitable for use under water.

"The cost savings are enormous, because laborious preparatory work is eliminated. For example, plotting with surveyor's stakes and guide wires is no longer necessary," explains Schutte. "The machine operator starts the engine and can begin right away." Incorrect excavation is prevented, saving time and money that would otherwise be required for rework. As a result, embankments or projects with numerous incline angles can also be accomplished without any problems. A productivity gain of 20% to 30% was achieved by using the 3D system, estimates Schutte.