Topcon's President and CEO Ray O'Connor has received an Honorary Doctorate from the Dublin Institute of Technology. 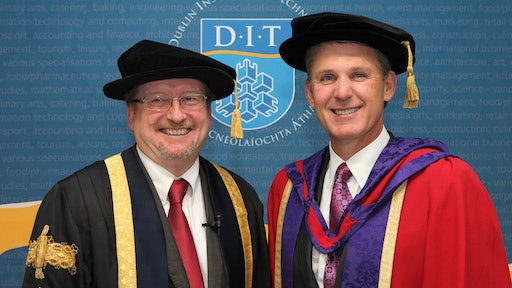 The award was conferred in recognition of O’Connor’s outstanding achievements in international business and innovation. Originally from County Kildare and now based in California, O’Connor attended the ceremony, accompanied by his wife Nancy, as well as several family members who are living in Ireland and in the United Kingdom.

In his speech to the assembly, the DIT president, Professor Brian Norton, welcomed O’Connor back to DIT, where he had completed his studies in construction in the early 1980’s.

About O’Connor, Norton said, “Your positive, forward-looking approach to developing new businesses, and your ability to work across geographical and cultural borders, provide a real example to us as educators and to our graduates as young professionals.”

O’Connor travelled to the U.S. when he finished his studies at DIT. He worked for a number of different companies before joining Topcon America, a division of the Tokyo-based Topcon Corporation in 1993.

Dr. Mike Murphy, dean of the College of Engineering and Built Environment, said that “in addition to other accolades, Mr. O’Connor was also the first person who was not Japanese or of Japanese descent to receive the prestigious Toshiba Business Performance Award for his superior leadership and performance.”

In addition to his role as President and CEO of TPS, earlier this year O’Connor was appointed Senior Managing Executive Officer of Topcon Corporation.

“There is no doubt that Ray O’Connor has enjoyed great success in his career, and we honor him for that. We also honor him for the attributes that have helped him to achieve that success – in particular, his outstanding leadership and team-building qualities and the unlimited vein of curiosity that drives him to continue to learn.”

O'Connor says, “It is indeed a distinctive honor and humbling experience to be included in this extraordinary group of world leaders in receiving this special award from DIT.”

O’Connor was conferred in the company of DIT graduates of the Department of Engineering and Built Environment, accompanied by their families. The DIT is one of the largest institutes of higher education in the country with more than 19,000 students and a staff of about 2,000.