The precision ag industry has been dealt a rough hand with a shrinking labor force and the drought that some compared to the Dust Bowl of the 1930s. 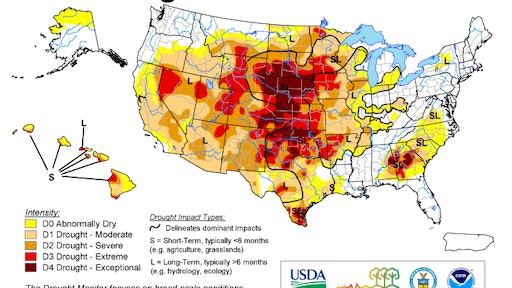 The U.S. Drought Monitor is produced in partnership between the National Drought Mitigation Center at the University of Nebraska-Lincoln, the United States Department of Agriculture, and the National Oceanic and Atmospheric Administration.

2012 was an interesting year all-around. It was a heated election year, and quite literally a heated year temperature-wise. The low rainfall and high heat conditions of the summer brought on comparisons from the Dust Bowl of the 1930s.

The USDA Economic Research Service released a statement as to the potential affects the drought may have on crops, livestock and food prices.

While the drought may create extremely difficult conditions for crop yield and consumer food prices in the years to come, it has encouraged the more rapid development of precision irrigation systems. According to a recent article by Eric Sfiligoj, Editor of CropLife and CropLife IRON magazines, one of the hottest trends in the precision ag industry was water management systems and technologies.

According to Jeremy Wilson, technology specialist for Crop IMS, Effingham, IL ... “the adoption of GPS-based irrigation systems with variable-rate application water maps has started moving east into the Midwest at a rapid pace in the past year,” says Wilson. Coupled with this, he adds, is the adoption of sub-soil drainage, which has increased dramatically during 2012. “A majority of this equipment is now outfitted with RTK-level GPS equipment to insure the proper placement of field tile,” says Wilson. “This has, at the same time, led growers using RTK-level GPS on their other equipment for application since they own the RTK equipment for tile machines.”

The latest tile installation systems from companies such as Intellislope are employing RTK guidance to provide sub-inch positional accuracy both left to right and up and down combined with a specialized plow for enhanced accuracy and efficiency.

Take a look at the interactive U.S. Drought Monitor map from the USDA

A separate blow to the industry may be the shrinking skilled labor force to develop these desired precision technologies. Precision ag includes remote sensing or GPS, soil and grid sampling, and information management tools. According to Dr. Paul Gunderson, Director of Dakota Precision Ag Center (DPAC), "There is an accelerating rate of adoption and use of precision technologies in the High Plains. The dilemma is that we need more people who can provide service for these technologies."

It is because of this need that DPAC was recently awarded two grants for training programs specific to precision ag skill development. One grant came from the Department of Labor and was awarded to Lake Region State College. The second grant came from North Dakota's Department of Commerce for continuing education programs for individuals already in the ag industry.

"Currently, nationwide there are 8,000 unfilled positions requiring knowledge in precision ag but not enough people to with the right skillsets to fill those openings," Gunderson continues.

PrecisionAg.com released its "Top 5 Tech Trends in Precision Ag for 2012" and surprisingly guidance systems were fourth on the list. It can be assumed that the widespread adoption has slowed developments and instead the technology advancements have been more geared toward refinement. Adoption has slowed as well, potentially due to the poor growing season in many areas, thanks to the drought of 2012.

Read: "More than 130 Iowa Scientists Issue a Statement that 2012 Drought is a Sign of Climate Change" ... What do you think?

The Farm of the Future

Electrohydraulics: The Future of GPS