Topcon Honored for its Support of Pompeii Renovation Project

Topcon was recently honored for the support it has been lending to the renovation of the Italian city of Pompeii. 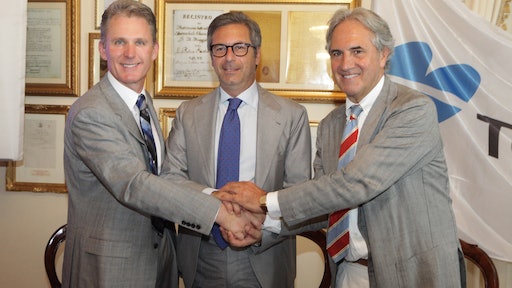 Topcon's Ray O'Connor (far left) was presented with a key to the City of Pompeii.

Topcon Positioning Systems (TPS) and its president and CEO, Ray O’Connor, were honored by the City of Pompeii, Italy and four Italian universities for assisting with the “preservation and renovation” of the historic landmark of Pompeii.

Old Pompeii, one of Italy’s major tourist attractions with 25,000 visitors a day, was literally “falling apart” after 2011’s record rainfall, according to one report. The Italian government, through the University of Naples and the City of Pompeii, allocated 120 million Euros to the preservation of the old city.

Pompeii, located near present-day Naples, was partially destroyed and buried under 10 to 20 feet of ash and pumice in the eruption of Mount Vesuvius on August 24, AD 79. The city was lost for nearly 1,700 years before it was rediscovered in 1748.

Also involved in the project is the United Nations Educational, Scientific and Cultural Organization (UNESCO), which designated Pompeii as a World Heritage Site. Topcon’s Italian distributor – GEOTOP Topcon – and its president and CEO, Ivan Di Federico, will work directly with the government officials and the four universities (a consortium known as Benecon).

Before restoration on the city could begin, site mapping and precise information about ground and building movements had to be done. That’s where TPS came into play.

Topcon won the bid to provide precise survey, mapping and GIS equipment and software for the project. O’Connor’s personal involvement in the project was rewarded by the announcement that he would receive the “key” to the City of Pompeii, as well as receive an honorary master’s degree in architecture from the University of Naples.

O’Connor says, “It is a very high honor, indeed, to be recognized by the mayor of Pompeii and the prestigious University of Naples. However, it is a much higher honor to be part of an incredible cooperative undertaking like working together to preserve one of the world’s most important and impressive historical sites.

“It is rewarding to know that today’s technology is being used to preserve the past so future generations can observe and learn about one of the world’s most important and impressive events.”

Di Federico says, “The archeological site will become a ‘laboratory of innovation.’” He says the first project objective would be “the creation of a 3D mapping system. Survey teams will recreate the site in a virtual form with great precision by overlaying images and laser scans to precisely measure the distance between each point, thus creating the old city in 3D imagery.”

This reality technology, he says, “will allow for visitors to see themselves in the original environment, as if they were Roman citizens of Pompeii before the devastating volcano explosion.”

Additionally, Benecon will “have a cultural database, which combines background information – historical, natural and chemical – to add to the wealth of information that presently exists about the city and its history.”

As the first archeological site in the world to use technology in this fashion, Di Federico says, “This project will be a top priority for Topcon and will include collaboration with Topcon technology groups in Livermore, CA, Europe and Japan.”