A captain of a steamship takes it upon himself to design and manufacture a purpose-built ship unloading crane. 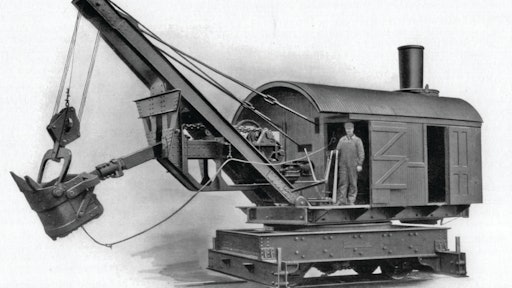 Rated from 1-1/4 to 2 cubic yards, the Type No. 4 was the largest Thew horizontal crowd steam shovel.

Richard P. Thew entered the shipping business on the Great Lakes in 1884 when he built one of the first steamships on the Lakes at Lorain, OH. He named the vessel the W. P. Thew after his father and captained it himself, earning the lifelong nickname Captain Thew.

Thew hauled iron ore to the docks in Lorain, where it was transferred to railroad cars for shipment to the steel mills in the area. Efficient handling of the ore from the ship’s hold and dockside stockpiles posed a problem; it had to be done by crane, by a railroad shovel or by hand. Neither the cranes nor the shovels of the day were suited to such work: The railroad shovel’s bucket dug in an arc, which either left significant amounts of material behind when digging from a flat surface like a dock or gouged into the surface, and the boom swung in roughly a 180 degree arc from a fixed frame.

It fell to Alexander Ephraim Brown of Cleveland, OH, to pioneer purpose-built ship unloading cranes in the late 1800s. For reasons unknown, Brown’s designs evidently didn’t make a strong impression on Thew. Either that, or he saw the vast potential for an improved shovel beyond ship unloading and bulk cargo handling applications. Be that as it may, in 1895 the Variety Iron Works, also of Cleveland, built a shovel designed by Thew and H. H. Harris.

Thew’s shovel was revolutionary on two fronts. It was the first successful full-revolving shovel following an unsuccessful design by Osgood Steam Shovel and Dredge of Albany, NY. It also incorporated the first horizontal crowd, by which the dipper stick crowded along a rack instead of swinging on a pivot.

The full-revolving shovel could dig and dump at any angle relative to the direction of travel while reducing the shovel’s footprint, and the horizontal crowd enabled the shovel to dig evenly along the surface of the dock. Full-revolving upper works became the standard for all excavators as half-swing machines were discontinued in the 1930s and 1940s, and Thew’s idea of crowding the bucket horizontally into the bank has been used on the largest cable and hydraulic shovels.

Thew eventually adopted the Lorain trade name for his products, and his company was acquired by Koehring Company as a division in 1964. Koehring continued use of the Lorain name, and was itself acquired by Northwest Engineering in the spring of 1987. Northwest had purchased Terex Corp. in 1986 and, two years later, assumed the Terex name which continues today. A fully restored and operational 1913 Thew Type No. 0 steam shovel is at the National Pike Steam, Gas & Horse Association grounds near Brownsville, PA.