Utilization of a hybrid system in military vehicles improves personnel survivability while also offering a base for future technology implementation. 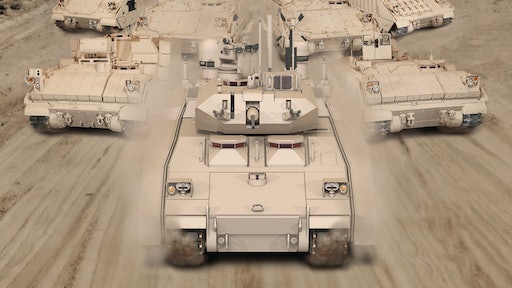 Through the ground combat vehicle program, the U.S. Army intends to modernize its fleet for improved personnel survivability, as well as the implementation of new and future weaponry, communications and other vehicle technologies.

In 2011, the U.S. Army began the Technology Development Phase of its ground combat vehicle (GCV) program. The Army’s goal is to create a more modern fleet of combat vehicles which will not only be able to accommodate the latest technological developments—such as those used for communications systems and weaponry—but also future technologies yet to be developed.

BAE Systems (BAE), Endicott, NY, is one of two teams awarded a contract to develop the GCV. The BAE Systems-Northrop Grumman GCV will incorporate a hybrid electric drive system (HED) which BAE is developing in partnership with QinetiQ Group plc, Hampshire, United Kingdom.

The HED will enable electric power to be provided to various subsystems within the vehicle, such as communications systems, or to a traction drive system (TDS) to help move the vehicle.

How the system works

Two six-cylinder engines are used to generate the energy necessary to power the vehicle’s 600V lithium-ion battery system, which was developed by BAE and Saft SA, Bagnolet, France. Energy generated by the engines is first sent to a generator system where it gets converted into electrical power, and is then delivered to the battery system where the energy is stored until it is needed to power various systems on the vehicle.

In addition to its work with the BAE Systems-Northrop Grumman GCV, Saft is also partnering with CALSTART to test the use of the U.S. Army’s 6T configuration 12V lithium-ion batteries in commercial vehicles.

Power stored in the batteries can be used to power vehicle subsystems as well as be used in conjunction with engine power to move the vehicle. When powering subsystems, the HED uses the stored energy within the battery system to provide the necessary energy instead of the engines. Deepak Bazaz, Program Manager Supporting the Ground Combat Vehicle Program at BAE, says the HED enables the vehicle to be used as a command post for shorter operations or setting up camp overnight. Instead of having to bring in generators to provide power when stationed in a specific spot, the GCV’s hybrid system can be used to generate the necessary energy to run campsite operations.

In a mode called Silent Watch, the engines can be turned off altogether, says Bazaz, and the basic mission functions of the vehicle can be conducted all on battery power. Sensors, computers and various other operation-critical systems can all be run using only HED. Having the capability to turn off the engines, without losing certain vehicle functions, increases the safety of military personnel by reducing the amount of noise and heat the vehicle would otherwise create if running the engines.  “[This] helps from a survivability standpoint because [the enemy] can’t detect you if you’re just running on battery,” he says.

When not being used to run auxiliary functions, the power stored in HED’s battery system can be delivered to the TDS to help propel the vehicle forward. Designed in conjunction with QinetiQ, TDS is an electric drive propulsion system that is used in place of a traditional transmission. Bazaz says TDS is essentially a set of motors which convert the electrical power from the hybrid system back into mechanical energy that is then used to drive the tracks of the vehicle and move it forward.

According to Bazaz, being composed of motors enables TDS to provide full torque at any speed. “Even if you’re starting from a dead stop you can bring full torque, which allows you to have a ‘jackrabbit start’ versus a more conventional system where you have to rev up the engine [before] the system starts responding,” Bazaz says. He explains further that if two vehicles were lined up next to each other and the only difference was that one had a hybrid system and the other had just an engine, the hybrid vehicle would demonstrate a significant improvement in acceleration from the starting line. “That’s important because after you’ve conducted your mission, you want to get out of there, and quickly,” Bazaz explains. “That’s part of your survivability; be able to do what you need to do and have a high mobility that propels you to your next spot to conduct your next mission.”

Helping improve operator survivability is one of the biggest benefits BAE sees for utilizing the hybrid system in the GCV. “That’s very important because we didn’t develop or mature [the hybrid technology] because it’s the 'cool' thing to do,” says Bazaz. “We definitely see some operational benefits…and a lot of them are near-term, but [a hybrid] also opens up the door to future opportunities.”

Bazaz says the modularity of HED can be beneficial to the design of a vehicle. Because HED is an electric hybrid system, the engines do not have to be coupled to a transmission or the vehicle’s electronics system. This enables designers to determine the best possible placement of the engines within the vehicle. It also allows the hybrid system and engines to be packaged in different vehicle configurations. “You could bring [the] hybrid [technology] to legacy platforms and significantly improve performance and fuel economy on those platforms,” notes Bazaz.

As is the case with the majority of hybrids, HED provides the opportunity for improved fuel economy. This is due in part to the sizing of the engines. Because HED is able to provide power for auxiliary functions as well as supplemental engine power, the engines have been sized for their optimum operating point. By sizing the engine more efficiently—which often equates to it being a smaller engine—the vehicle is able to run as a more fuel efficient system.

Besides the obvious monetary benefits of using a more fuel efficient system, Bazaz explains there is also a human capital benefit. With the hybrid GCV requiring less fuel, the need for fueling convoys to be sent into harm’s way will be reduced. “Our enemy…[has] recognized that one way to impact our soldiers is to cut off their fuel supply,” says Bazaz. “Those fuel convoys are easier targets than an M1 or Bradley infantry fighting vehicle or a ground combat vehicle.” Fewer deployments of fueling trucks equates to an increased likelihood of saving lives.

In a similar vein, the improved lifecycle of the hybrid system over conventional systems reduces the amount of times personnel have to take spare parts out into the field to perform maintenance. Bazaz says there are fewer moving parts incorporated into HED, minimizing the chances of the system breaking down.

The electronic architecture HED provides makes it easier for additional technologies to be added to the vehicle as they mature. As vehicle technologies continue to advance, such as those for weaponry, it will be more beneficial—and cost effective—to already have a system in place on the vehicle that will be able to provide the necessary power for those technologies.

According to Bazaz, most of the military vehicles currently available generate power in the 20 kW range, whereas the GCV can generate 1 megawatt of power. “It opens up the door to technology insertions we haven’t even thought of yet,” explains Bazaz. “It’s important to build a system with that growth in mind rather than limiting yourself to what a conventional system would give you.” Instead of having to add an auxiliary power unit, for example, to get the additional power to run the newest technology, the hybrid system will already have the capability to handle the power requirements.

Bazaz says the hybrid system is ready for production and integration into the GCV, which the U.S. Army intends to begin fielding by 2015-2017.

Who you calling a hybrid?