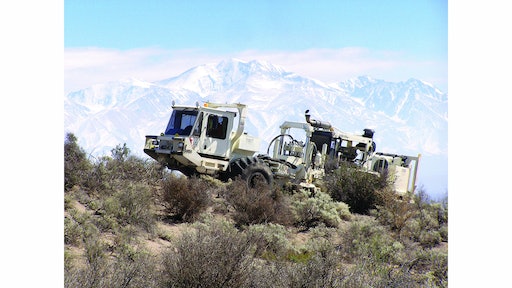 This new section in OEM Off-Highway magazine was created in order to showcase unique vehicles and the innovative engineering and systems that allow them to perform in extreme climates, terrains or operational conditions. Have an extreme machine you want to submit for consideration? Send it to editor@oemoffhighway.com.

The oil and gas industry is one of the world’s largest industries. The upstream segment of the industry refers to the exploration and exploratory drilling of natural resources on land or offshore. INOVA Geophysical, a seismic equipment manufacturer (INOVA), facilitates land data acquisition by supplying seismic equipment to oil and gas exploration companies and geophysical service providers to image the subsurface of potential drilling locations.

Accurate mapping of an area’s subsurface helps companies determine whether to invest in drilling operations in a particular sector of the world. “Because of the large financial investment required to commence drilling operations, oil and gas companies want a high probability of return on this investment,” says Alex Gorosito, Senior Director of Source Products Engineering, INOVA.

The deeper into the ground a signal is sent, the more faded the signal becomes (proportional to the distance) and harmonic noise tends to phase out the signal. “The cleaner you can input the signal into the ground, the better chance you have to image those deep targets beneath the surface,” Gorosito says.

Geophysicists always want to input the same quantity of energy into the ground and keep that source signal’s signature consistent over time to make land evaluations and data processing easier. “Geophysicists are looking for significant amplitude variations from the returning source signal. If those variations are present, interpretation of that seismic data may lead oil and gas companies to take the next step in exploration in that region,” he explains. For that reason, INOVA has spent a lot of development time in improving the amount of force-energy being delivered and keeping the source signature consistent over time and over variable terrains.

“In order to do any type of subsurface exploration, you need to be able to generate enough energy into the ground and record it accurately as it comes back up to the surface,” Gorosito says. “We’re always looking to improve the efficiency of the force signal that we’re generating, as well as the signal’s repeatability.”

INOVA’s AHV Series vibrators have been used around the world for over 40 years and gone through several generations of vehicle design updates over the years. “Our hydraulic actuation system—which provides the source signal—has been redesigned throughout the years, while the vehicle frame has remained relatively unchanged,” he says. A stiffer baseplate design also assists in reducing harmonic distortion from the source signal.

Because of the sheer weight of the vehicle, the frame must be extremely durable in order for it to act as a hold-down weight for the baseplate. “Its mild steel, articulated frame also makes the vehicle very maneuverable in difficult terrains,” says Gorosito.

The global nature of the oil and gas industry means the vehicle can be operated in diverse climates ranging from the Russian arctic to the sub-Saharan desert and challenging terrains from the Australian outback to the rugged mountainous regions of North and South America. The vehicle’s flexible design supports different options such as tracks and several types of tires to operate in various environmental conditions.

Temperature extremes are handled through a few add-on components to protect various systems for consistent and optimal vehicle performance. For the severe cold in arctic climates, a safety hatch allows the operator to escape the cab should the heavy vehicle fall through the ice. The engine and hydraulic lines are covered by a winterized doghouse to maintain heat. A simple belly pan enclosure is also offered to help keep fluids warm. “Both snow and ice can stick to the baseplate surface which can affect operational efficiency and signal quality. We provide a urethane cover for the baseplate to act as a non-stick barrier between the plate and the surface,” says Gorosito.

Seismic vibrators are also used in other extreme environments such as deserts. “Two of the biggest challenges in desert conditions are maneuvering through sand and maintaining adequate comfort levels for the operator. The operator is in the cab for 8-12 hours at a time and can face ambient temperatures of up to 120 F in some areas, so a comfortable cab is essential for safe and efficient vehicle operation,” Gorosito says.

Operator comfort in regards to vibration is not an issue, as Gorosito explains that the hydraulic actuation system is almost completely isolated from the vehicle, and the oscillations between the frame and the vibrating mass assembly are minimal.

INOVA offers its durable, low-maintenance AHV-IV family of vibrators with the latest advances in source technology implemented in the industry standard Articulated Hydrostatic Vehicle (AHV) design. A variety of configurations and customization options are available to accommodate variations in terrain, environment or imaging requirements.

Download complete vehicle specs for the AHV-IV Commander (PLS-364) and the AHV-IV Renegade (PLS-380) at www.inovageo.com/products/source-products.html

Caterpillar Announces it Will Go "All-In" on Natural Gas