Pile driving was the solution to the problems of building a structurally sound railroad trestle, but adaptations needed to be made to suit the specialized requirements of driving angled piles to form a bent. 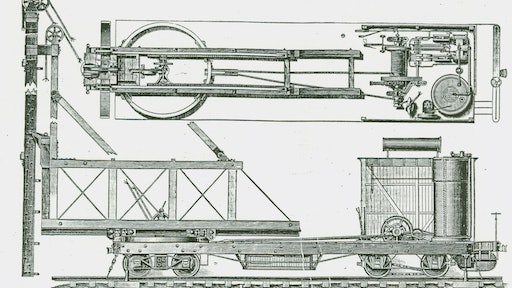 In the heyday of railroad construction, in the mid- and late 1800s, the construction of trestles posed a problem for the railroads and their contractors. Trestles, consisting of a series of supporting structures called bents and the track atop them, were built to carry the track across waterways, as well as land areas below grade that were uneconomical to simply fill. The problem was how to erect the bents, designed to be wider at their base than at the top so as to be stable, and of suitable strength to bear the required load.

Initially, the solution was to simply hammer or rivet them together on, hopefully, the best foundation that could be prepared and set them in place. The haste with which many railroads were built often called for the construction of temporary trestles, especially over land, that were later enclosed with earth fill. But what to do when the trestle had to be built on unstable ground, especially under water?

Pile driving by gravity, involving the lifting of a dead weight by human or animal power and dropping it onto a vertical timber, may have existed as early as 3,000 B.C. in Scotland. Leonardo da Vinci is among those credited with inventing a mechanical pile driver, and a mechanically sound drawing for a pile driver dates to as early as 1475 A.D. Otis Tufts (1804-1869) invented the steam pile driver, which—to oversimplify—used steam pressure instead of brute strength to force the hammer up for each blow.

Pile driving was the solution to the problems of building a structurally sound railroad trestle designed for long-term use, but adaptations needed to be made to suit the specialized requirements of driving angled piles to form a bent. Crawler and truck cranes did not exist, so the technology had to be rail-mounted.

The railroad pile driver provided these adaptations. Mounted on modified self-propelled locomotive crane carriers, the hammer was either gravity or steam-operated, and was mounted on leads. Specifications varied from one manufacturer and model to another, but we’ll use Industrial Brownhoist as a sample. On its rigs, the leads were typically 45 ft. (13.7 m) high. These leads could be erected from the flat transport position by engine power in 30 seconds, and were mounted on a telescoping truss that could be extended from 16-20 ft. (4.9-6.0 m) ahead of the forward wheel’s centerline, depending on the model. The truss could be slewed up to 90 degrees left or right, allowing piles to be driven up to 20 ft. from the center of the track, and the leads could also be angled up to 3 in. per foot through a battering attachment consisting of a worm gear with rack and pinion.

While pile hammers are mounted on mobile cranes, rail-mounted pile drivers still see some use in trestle repair or replacement projects in which access to mobile cranes is uneconomical and/or impractical.

The Historical Construction Equipment Assn. (HCEA) is a 501(c)3 non-profit organization dedicated to preserving the history of the construction, dredging and surface mining equipment industries. With over 4,000 members in twenty-five countries, our activities include publication of a quarterly educational magazine, Equipment Echoes; operation of National Construction Equipment Museum and archives in Bowling Green, OH; and hosting an annual working exhibition of restored construction equipment. The 2016 show is September 16-18 at our the museum. Individual memberships are $35.00 within the USA and Canada, and $45.00 US elsewhere. HCEA seeks to develop relationships in the equipment manufacturing industry, and offers a college scholarship for engineering and construction management students. Information is available at www.hcea.net, by calling 419-352-5616 or e-mailing info@hcea.net.