The flexible spacing abilities of SCHEUERLE SPMTs enabled them to transport a railway bridge in Germany without causing any major delays or dismantling of the bridge. 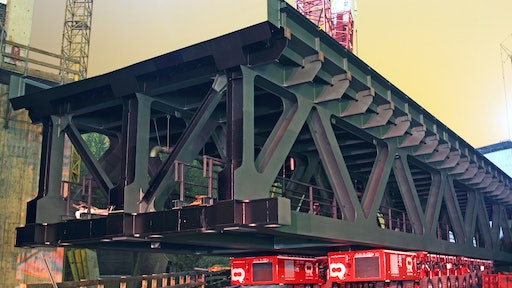 The precise control system of the SCHEUERLE SPMTs guarantees millimeter-accurate maneuvering and safety while the hydraulic pendulum axles keep the load in a horizontal position even when working on difficult terrain.

The procedure in replacing a complete bridge is often accompanied by a complete closure of the structure - delays in the process can easily become very expensive. In order to minimize the time required for the replacement as well as ensuring maximum performance reliability, Riga Mainz decided to use of two SCHEUERLE SPMT combinations (Self Propelled Modular Transporters) for replacing a railway bridge in Bad Wimpfen in the southern German state of Baden-Württemberg.

The twin-track bridge segment of the railway bridge was initially pre-assembled on the Bad Wimpfen festival site and then transported to its final destination - a distance of around 600 meters. Here, it was lifted into position by means of a 600 t crawler crane. The transport route was planned in advance with the utmost precision, and the spacing between the SCHEUERLE SPMTs was thus determined to ensure that the centrally-positioned street islands did not have to be structurally changed in any way but could be simply driven over. As a result, in spite of impressive 41.82 m x 9.87 m x 5.37 m external dimensions of the cargo, only two traffic light posts had to be dismantled during the entire transport. Riga Mainz has long been relying on SPMTs from SCHEUERLE and with good reason, says Joachim Kolb, Business Unit Manager (Road) at TII Sales, the sales and distribution division of the TII Group, a globally operating enterprise which incorporates SCHEUERLE, NICOLAS and KAMAG. "Our vehicles are unmatched when it comes to technical reliability and worldwide coverage. This gives our customers the required security which they fully appreciate. Worldwide, 70% of all transports over 3,000 t as well as 90% of all transports over 5,000 t are carried out on vehicles from the TII Group, which speaks for itself," says Kolb.