Two Manitowoc Grove mobile cranes were chosen for construction of the Maggie Daley Park in Chicago for their reach and ability to work in constrained environments. 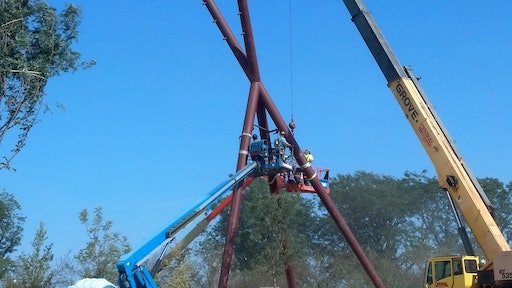 The two Grove cranes placed grillage steel to support recreational climbing towers and an ice rink building, and erected light poles throughout the park, which is named after the wife of former Chicago mayor Richard M. Daley.

The cranes, one owned by McCook, IL-based K&K Iron Works and the other rented from Crestwood-based Central Crane, were chosen for their reach and capacity. The park was constructed on top of an underground parking garage, which limited the placement of the cranes. The companies had to place the cranes in areas that could support their ground-bearing pressure, but still provided ample reach and capacity to complete the lifts.

Seth Bransky, Project Manager for K&K Iron Works, says the Grove cranes were an ideal fit for the challenging job site terrain and physical logistics. The lifts were very intricate and required rigorous planning due to the limited placement opportunities, he explains.

“The work was very challenging because you cannot just roll on top of an existing parking garage anywhere you please,” Bransky says. “The reach of the Grove cranes was essential to completing the project quickly and safely.”

Construction began at the site in 2012, after the job site’s ground surface and trees were removed to repair the roof of the underground parking facility. The GMK3055 was used to lift steel onto the top of the garage in order to transfer weight loads to the garage columns.

The 141-foot boom on the GMK3055 handled the lifting work with ease, using its maximum length to lay some of the lighter steel beams over the parking facility. The crane’s 60 USt capacity was more than enough to complete the heaviest lift of 5.5 USt.

The 30 USt Grove RT530E-2 was also assigned tasks worthy of its features. The crane installed lighting tripods through the park, which required exceptional reach. Its 95-foot boom installed the lighting at heights up to 50 ft. Its maneuvrability on the job site also a particular asset.

“The durability of the crane allowed it to be quickly moved around the park without ruining any of the newly poured sidewalks, which was critical to complete the project on a tight schedule,” says Mike Kazmirak, Project Manager at Aldridge Electric. “We were able to get the crane back and forth throughout the park without any problems.”

Bransky adds that the job site had a range of different terrain, and that it was necessary for the crane to get very close to the lights to complete the lifts.

“The mobility of the RT530E-2 and its ability to get close in to the structures was very helpful for the project,” he says.

The company purchased the crane from Walter Payton Power Equipment, the Riverdale, IL-based authorized dealer of Grove and Manitowoc cranes. The company has locations across Illinois, Indiana, Kentucky and Michigan.

Aldridge Electric, a family-owned company also established in Chicago, is one of the nation’s leading civil and electrical contractors, with more than 61 years of expertise in complex transportation, drilling, mass transit, power and utility projects. The company has more than 850 employees and a fleet of nearly 1,200 pieces of equipment, making it one of the largest specialty contractors in the U.S.

Walsh Construction was chosen by the Chicago Park District to complete phase two of the Maggie Daley Park construction, which occupies the former site of the Daley Bicentennial Plaza. Headquartered in Chicago, Walsh is a family-owned general contracting, construction management and design-build firm. The company was founded in 1898 and is recognized as the largest construction firm in Chicago.