A Manitowoc 31000 with Variable Position Counterweight and requiring 70% less space than competitive models recently aided the expansion of a South Korean petrochemical plant. 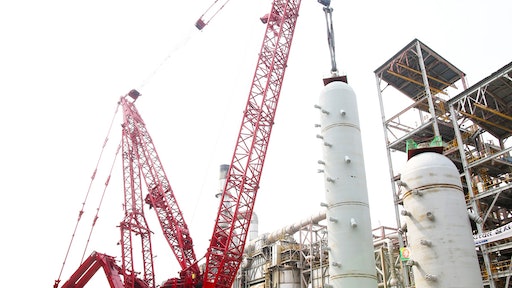 The Manitowoc 31000 is the largest crawler crane the company has ever built and while its headline feature is the 2,300-ton capacity it offers, its biggest selling point is not actually its lift power but rather its ability to operate in smaller spaces with less set-up costs than other alternatives. The latest project for the 31000, operated by Chunjo, South Korea’s largest crane rental company, demonstrated its unique capabilities perfectly. For the job the crane undertook two huge lifts for the expansion of a petrochemical plant – lifts that no other comparable crane was able to make.

The biggest design feature on the Manitowoc 31000 that gives it its unmatched capabilities is the patented Variable Position Counterweight (VPC) which is suspended from the rear of the crane. The VPC operates laterally behind the rotating bed to boost lift capacity. Having the counterweight suspended from the crane, and not fitted to a mobile tray as alternatives do, means far less ground preparation in getting the crane ready to work and lower on-site costs while allowing the crane to work in smaller spaces.

For the job in Ulsan, South Korea, the 31000 was the perfect solution for main contractor Daelim ENC, which needed a crane to place two reactors as part of the expansion of the S-Oil petrochemical facility. As the expansion work was taking place within existing infrastructure at the plant, space was extremely limited. To make the lifts, Daelim had to place the crane on a landfilled river, with a road running adjacent to it. However, the road could not accommodate a wheeled or crawler-mounted counterweight tray found on more traditional heavy lift cranes ­– giving the 31000 a distinct advantage.

Jang Hwan Chang, Chairman of Chunjo Construction, says that when assessing the job site it quickly became clear that the Manitowoc 31000 was the best option.

“When we first spoke with Daelim there were several options being considered, but once the true difficulty of the lift work became apparent, the 31000 was a clear favorite and probably the only realistic option,” he says. “And these two lifts have been such a success that plant engineers at S-Oil are now looking at future expansion plans and designing larger modules that can take advantage of the 31000’s capabilities. This crane will help S-Oil save time and money on future expansion plans, delivering true value to the customer.”

For the lift work, the Manitowoc 31000 was equipped with 70 m of main boom and 964 t of counterweight. Both picks were made from the same position, first an 800 t reactor, which was lifted at 24 m radius; and then a 400 t reactor that was lifted at 34 m radius. Impressive as these lifts are, they fall comfortably within the 31000’s lift abilities, as S-Oil had imposed an additional factor of safety on all lifts on the project, limiting them to 75% of the published load chart.

Because of the narrow site, there was no space for a tailing crane. So Chunjo employed a heavy-duty transporter to tail the reactors as they were moved into position. This had to be done delicately because there were strict limits on the amount of oscillation the reactors could withstand during placement, with particular attention paid to the moment each reactor detached from the tailing transporter. However, the close control and strength of the 31000 meant that even this potential hazard was negotiated without a problem.

“This job really underlined the true capabilities of the 31000,” says Jang Hwan Chang. “It is more economical, requires less preparation and causes less disruption than alternatives.”

With work on the S-Oil job now complete, Chunjo Construction is currently preparing the 31000 for transportation to Vietnam where it will complete its next lift in August 2015.