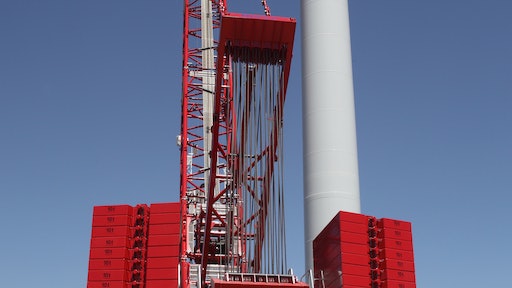 One of the most hotly anticipated cranes in recent history is proving it’s worth. Bigge Crane and Rigging is the first company to put the Manitowoc MLC650 to use, employing the innovative crane to erect a large wind farm in the U.S. state of Minnesota. The MLC650 features the Variable Position Counterweight (VPC), a unique floating counterweight design.

Weston Settlemier, President and CEO of Bigge, says the MLC650 offered several advantages over other large crawler cranes for the wind farm project.

“Moving forward, we expect the wind turbine market to demand the MLC650 over the current offering of crawler cranes because the VPC saves time and money,” he says. “The crane’s technology allows for reduced erection time, increases walking speeds and reduces transportation costs. In addition, the VPC balanced technology reduces the point loading of crawlers and reduces ground preparation required by the wind turbine erection contractor.”

On the site, the MLC650 is configured with 341 ft. of main boom, 24.9 ft. of extended upper boom, and only 326 USt of counterweight. The crane is lifting prefabricated wind tower sections and turbines (nacelles) in loads weighing up to 118 USt. It is also erecting the blades that weigh 12.5 USt each at heights up to 295 ft. The VPC system dynamically positions the MLC650’s counterweight to suit each lift. The counterweight moves along the rotating bed and is automatically positioned based on changes in operating radius.

Beyond the crane’s setup, Bigge said there were even more features of the crane that offer benefits over competitive crawler cranes typically used on wind farms. For one, the MLC650 doesn’t have a fixed mast; it has a smaller, live mast, making it easier to move around the job site. Power lines are often found on wind farm sites that require cranes with fixed masts to be disassembled so they can move underneath them before they’re reassembled again on the other side. The MLC650’s mast doesn’t require as much disassembly to lower its height, meaning less down time and less prep time.

“One of the MLC650’s biggest selling points for me is its larger wire rope (32 mm) and greater line pull (48,800 lbs.-ft.),” Krane explains. “It can work with six parts of line, rather than eight parts. These features make the crane’s hoisting much faster than other cranes, which will enable us to complete this job in a shorter amount of time. Also, it doesn’t need an assist crane to raise its boom, again saving us time and money.”

As the MLC650 was new to Bigge, Manitowoc Crane Care sent representatives to the Minnesota job site to ensure that the crane’s erection and operation went smoothly. The endeavor went off without a hitch, and the crane’s operator says it has been working exceptionally on the job site.

After the MLC650 completes the Pleasant Valley Wind Farm project later this year, Bigge will take the crane to Ardmore, OK, where it will work on a similar wind farm project for RES. The company will also soon deploy its second MLC650 to job sites, where it’s expected to work on power plant projects.

“I’ve been very impressed with the MLC650,” Krane says. “The new VPC technology is great, and the assembly and initial operations went very smoothly. It was in great shape and ready to go, right out of the box.”