Nettbuss placed an order for 132 buses and minibuses from Iveco Bus during the latest edition of the international trade fair Busworld 2015. 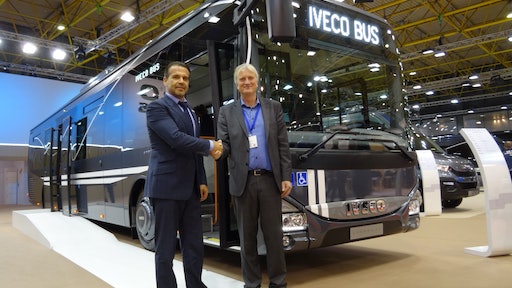 Iveco Bus, a brand of CNH Industrial, has signed an order with Nettbuss for 132 buses and mini buses. Nettbuss is one of the largest operators in Scandinavia. It is owned by the Norwegian Railroad and operates in Sweden and Norway with a fleet over 3,300 buses. The order was confirmed at Busworld 2015, a major European trade fair held every two years in Kortrijk, Belgium.

Nettbuss has had Iveco Bus Crossway Euro 6 buses in operation amongst its fleet since 2014. The new order consists of 107 units of Iveco Bus’ Crossway Line and Crossway Low Entry models and 25 Iveco Daily minibuses. Crossway is the brand’s flagship intercity range, which is produced at CNH Industrial’s bus manufacturing facility in Vysoké Mýto, in the Czech Republic. The site celebrated its 120th anniversary earlier this year and is considered to be one of the main bus production hubs in Europe. The Daily minibuses are manufactured in Suzzara, Italy, Iveco’s center of excellence for light-duty commercial vehicles. The minibuses will feature Iveco’s new and exclusive Hi-Matic 8-speed automatic gearbox.

As a result of this new partnership between Nettbuss, Iveco Bus and its dealer Vest Buss Norge, Nettbuss will deploy 112 units in Glåmdalen and Grenland, and 14 in Møre, three Norwegian cities where the company recently won transport contracts, while the remaining six will be integrated into its fleet for the city of Bergen. The buses will come into service between January and June 2016.