Manitowoc will have four of its newest all-terrain cranes on display at bauma, including three making their international trade show debut and one which will be unveiled during the show. 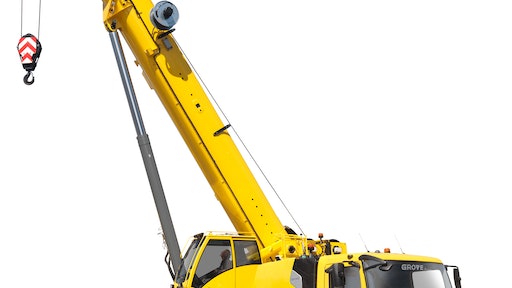 There will be four Grove GMK all-terrain cranes on the Manitowoc Cranes booth at bauma 2016, including three new models which are making their first appearance at an international trade show. The details for one of the cranes will be confidential until the show, but the yet-to-be-disclosed model is sure to draw plenty of attention at the event.

Joining the new launch will be the 250 t capacity GMK5250L and the 100 t capacity GMK4100L-1, while the best-selling 400 t capacity GMK6400 will also be displayed. The GMK5250L was launched in the middle of last year, and the first units are being delivered to customers. The GMK4100L-1 will be officially presented in the coming weeks with deliveries starting shortly after the show. The GMK6400 is well-known to the industry and also appeared at bauma 2013, where it received an innovation award from a leading lifting industry trade association for its ground-breaking design.

The introduction of the GMK6300L and GMK6400 at bauma 2010 marked a modern watershed in mobile crane design at Grove, and since then the brand has delivered a continuous stream of innovation. Its cranes since 2010 are most notable for their class-leading specifications and a host of capabilities that are unavailable with alternative machines. By doing this, Grove customers have access to cranes that can complete tasks that rival machines cannot, leading to better return on investment for them.

Features such as the pioneering use of a single-engine design with Fuel Saver function; the Megadrive hydrostatic drive; and the self-rigging, capacity-enhancing MegaWingLift have redefined the standards of excellence in the industry. Both the GMK5250L and GMK4100L-1 continue this theme of innovation and deliver class-leading capacity and reach.

Jens Ennen, Senior Vice President of All-Terrain and Truck-Mounted Cranes at Manitowoc, says the company constantly strives to design cranes that will improve return on investment for customers.

“We have focused strongly on bringing more reliability, ease of transportation, user friendliness and capacity to our cranes,” he says. “The mobile crane industry continues to evolve, and we want to lead the way in showing our customers what more they can achieve with their equipment and how our innovative designs can deliver better financial returns for them. We want to bring new features to our cranes and also bring greater versatility to the features that are already there. We are looking forward to presenting our new models at bauma 2016 and introducing their many benefits to customers and visitors.”

Grove was the first manufacturer to produce a 100 t capacity crane on four axles when it introduced the GMK4100L. Now the new GMK4100L-1 will raise the bar even higher with some notable improvements. First, the use of a single engine versus the previous two-engine design means the crane is able to carry more counterweight, delivering superior lifting ability. In fact, the GMK4100L-1 offers the best load charts in this class when configured both with its full complement of counterweight, or when configured in its most common road travelling configuration with a Gross Vehicle Weight (GVW) of less than 12 t per axle (a common axle load limit in many countries). Customers in North America will also benefit from the crane’s fully removable counterweight that brings the basic crane’s GVW down to the lowest level in the four-axle category for a 100 t rated machine that offers a 60 m boom.

The new crane is also more compact than its predecessor, boasting a 2.55 m width versus the 2.75 m of the GMK4100L, and overall it is also 0.5 m shorter, making it more maneuverable on congested job sites. Better profitability for users is available through the inclusion of the Fuel Saver function on the Tier 4 Final/EUROMOT 4 single engine. Life is also made easier for the operator with Manitowoc’s new CCS, or Crane Control System, which is being made available on all new Manitowoc products. CCS includes the intelligent Boom Configurator Mode, which allows the operator to simply input the weight of the load, radius and height to be lifted to, and then the system automatically configures the correct boom length at the touch of a button.

The look of the crane is also improved with a facelift that includes a new ergonomic carrier cab. As one would expect, trademark features, such as the Twin Lock boom pinning system, Megaform boom shaping and Megatrak active suspension, are all included in the new crane.

The Grove GMK5250L is largest of three new five-axle all-terrain cranes that Manitowoc launched in 2015. It was introduced in April and was followed in July by the launch of the GMK5180-1 and the GMK5200-1. As with all Grove all-terrain crane launches, the GMK5250L offers several notable innovations, perhaps the most striking of which is its inclusion of the VIAB turbo clutch with integrated retarder – the first ever mobile crane to feature the system.

The VIAB turbo clutch module eliminates both fluid overheating and clutch burning, and delivers wear-free starting and braking, exceptional maneuverability and better fuel economy. It also contributes to fuel savings, which for the GMK5250L are up to 30% lower than that of its predecessor, the GMK5220.

The GMK5250L is the strongest long-boom five-axle machine on the market. Offering compact dimensions and a maximum outrigger width of only 7.8 m (which is 0.5 m less than other machines in this segment) means the crane can get into the tightest job sites.

The main boom is an impressive 70 m, and boosting overall reach is a 21 m hydraulic swing-away jib that can be extended with either an 8 m boom extension, two 8 m jib inserts or a combination of both for a total possible jib length of 37 m. For optimum usage, the full jib can also be operated while the crane is working with its full 70 m boom. Another benefit is the ability to offset the jib by up to 50 degrees compared to 40 degrees on other Grove cranes – and an optional integrated heavy duty jib is available.

Like the GMK4100L-1, the GMK5250L has CCS with Boom Configurator Mode and again power is delivered via a single-engine design, in this case a Tier 4 Final/EUROMOT 4 Mercedes-Benz OM471LA, a 6-cylinder diesel engine with a 390 kW (520 hp) rating.

With its 12 t per axle configuration and dimensions suited to global roading requirements, the compact Grove GMK5250L offers excellent roadability. Compared with the GMK5220, the GVW has been reduced to give customers more transportation options, including the ability to carry more equipment. Special attention has also been given to the appropriate axle group spacing and specifically the fact that this exceeds 8 ft. (2.4 m) – a strict requirement for North America.

Once on the job site, the crane can be moved with its full counterweight of 80 t, saving valuable time that would otherwise be spent installing or removing counterweight sections. Additionally, some of the counterweight slabs are interchangeable with those of the GMK6300L, optimizing logistics and reducing transport costs for customers. An optional self-rigging auxiliary hoist that eliminates the need for an assist crane during on-site rigging is also available and can be interchanged with the GMK6300L and the two smaller models, the GMK5180-1 and GMK5200-1.

Joining the new launches will be a 400 t capacity GMK6400, one of the modern success stories of the all-terrain crane industry. The six-axle unit received an Innovation Award from the European crane and transport association, ESTA, at bauma 2013 and since then has been growing in popularity. In fact, the unit on show at bauma 2016 will be in the colors of French rental giant, Mediaco, and it is the fifth GMK6400 the company has purchased.

The GMK6400 is the strongest crane on six axles and a perfect embodiment of how Grove delivers better return on investment to customers through superior design.  Its fast rigging times, optimized transportation logistics and fuel economy make it both cheaper to run and more productive. Meanwhile its single engine design and focus on strength mean it can deliver lifting abilities more commonly associated with seven-axle or eight-axle cranes.

MegaDrive offers owners the best of both worlds: efficient on-road travel as well as precise positioning on the job site. And, as with the single engine concept, this innovation saved space in the crane’s design, allowing further optimization of lifting capacity.

Lifting capacity is also optimized through the inclusion of MegaWingLift, Grove’s patented tensioning system that can increase the strength of the crane while the boom is working at a steep angle. In the past, such systems have required an auxiliary crane to install, which is a more involved process with longer rigging times. However, on the GMK6400, the self-rigging MegaWingLift can be fitted in just 20 minutes.