During the construction of a parking garage, a Manitowoc MLC300 with variable position counterweight helped increase the capacity of the crane to make quick work of the project. 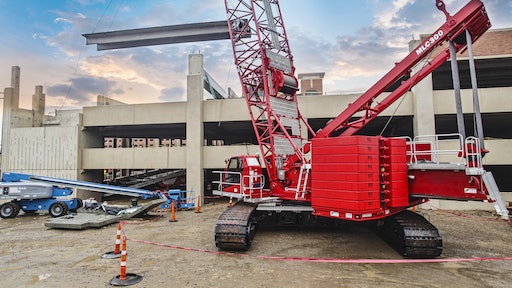 A Manitowoc MLC300 was a vital tool in a project to build a parking garage for Sparrow Hospital in Lansing, MI. Precast Services Inc. (PSI), was the main contractor on the project. It was the Twinsburg, OH-based company’s first experience with the crane and its innovative Variable Position Counterweight (VPC).

“The logistics of the job site really drove our choice to use the MLC300 for this project,” says Aaron Vnuk, Director of Sales and Operations for PSI. “We had to lift precast panels and other loads from a truck parked on an access road from outside the footprint of the garage, so we needed a crane with great capacity at a 115 ft. radius. The MLC300 was the perfect crane for this situation—the load chart is phenomenal.”

The 330 USt MLC300 was set up on a stone road that ran through the middle of where the garage was being constructed. It moved up and down the road from the center of the garage, and with 217 ft. of boom, placed loads to both sides. The crane lifted precast concrete panels, Double Tees, Spandrels and more, with loads weighing up to 35 USt. Most of the lifts rose to some 60 ft. to 70 ft. in the air. Precast Services used a 120 USt Grove GMK5120B to help erect the MLC300.

“Before the MLC300, we would have had to use a larger, 400 USt crane to get the reach and capacity we needed for this project. That would have easily added $100,000 in cost to the job,” Vnuk explains. “This crane also was quicker to set up and tear down. Its counterweights were easier to work with than previous cranes and we were able to use fewer of them. This saved us at least a full day’s time and the cost that would have come with it.”

The project began in October 2015 and wrapped up a few months later in December. The four-level, 50 ft.-tall parking garage will serve as an employee lot for Sparrow Hospital’s cancer center, which is also under construction. The lot’s dimensions measure 200 ft. by 400 ft., and it will feature a walkway connector for employees to cross directly into the new center upon its open. Lansing, MI-based The Christman Company served as the project’s construction manager.

PSI leased the crane on a suggestion from Detroit’s Laramie Enterprises Inc., with which the company has been doing business with for more than 25 years. Laramie originally purchased the crane from Manitowoc dealer Cleveland Crane and Shovel.

“Laramie always answers the call for us,” Vnuk says. “It is a top-notch company with great service—very responsive. The company can always provide us with the right crane for the right job and then offer great support once it starts working.”

Due to the project’s logistical restrictions, Bob Hunsaker, a sales representative with Laramie, says the MLC300 was an ideal choice and a better option than cranes of years’ past.

“For the weight of the loads that had to be lifted at such a long radius, the MLC300 had much better chart than any crane that a company would have rented in the past to perform this type of work,” he says. “Not only did it solve the logistical problem they were confronted with, it ended up saving them time and money over the course of the project.”

PSI is an employee-owned company, founded in 1988 by Charles Mayer and Barry Cooper. Now in its second generation of ownership, led by President and CEO Bo Kusznir, the company specializes in precast concrete erection across the entire country, with as many as 11 crews working from Connecticut to Texas.

Since 1917, Laramie Enterprises Inc., has been a family owned and operated business. Now in its fifth generation, the company is as strong as ever. It specializes in the provision of nationwide bare and manned crane rental, as well as over the road and heavy haul trucking.

“We have been purchasing Manitowoc and Grove cranes for more than 50 years,” he says. “They have proven to be the most innovative, cost-effective and reliable cranes in the industry.”