The U.S. Marine Corps has received approval for Oshkosh to begin Full Rate Production on the P-19R Aircraft Rescue Fire Fighting vehicle program which calls for 164 vehicles to be delivered through 2019. 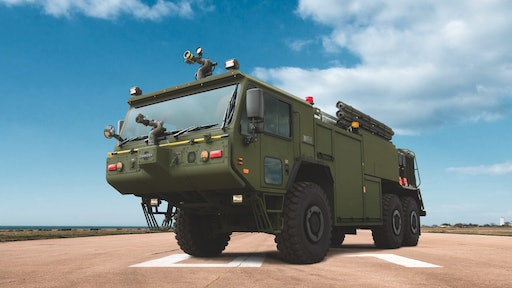 Oshkosh Defense LLC, an Oshkosh Corporation company, announces that the U.S. Marine Corps has received Milestone C approval to begin Full Rate Production (FRP) on the P-19 Replacement (P-19R) Aircraft Rescue Fire Fighting (ARFF) vehicle program. This approval represents a major milestone for the $192 million P-19R ARFF contract, which was awarded to Oshkosh in May 2013 to replace the P-19A fleet.

“The P-19R program represents a technological leap forward for the U.S. Marine Corps and its ability to respond quickly and effectively to aircraft emergencies,” says Pat Williams, Oshkosh Defense Vice President and General Manager of Army and Marine Corps programs. “The Oshkosh P-19R gives Marines greater off-road capability, speed and transportability for a full range of firefighting missions whether they’re at a military base or an expeditionary airfield.”

Since Oshkosh was awarded the P-19R contract, the company has successfully completed all required government development testing and evaluation, and readiness reviews required to achieve Milestone C and move the program into Full Rate Production (FRP). In total, Oshkosh will deliver 164 P-19R ARFFs through 2019. The P-19R will replace the P-19A fleet, which was first fielded in 1984 and is reaching the end of its service life.

The Oshkosh P-19R ARFF combines the industry’s most advanced fire apparatus and vehicle technologies to reach emergency scenes faster, and have more capability to manage a spectrum of emergency situations once they arrive to the scene. The P-19R delivers unprecedented levels acceleration with its 600 hp engine that allows for speeds up to 70 mph. The P-19R achieves “gold standard” performance in off-road environments with the Oshkosh TAK-4 independent suspension system. TAK-4 has been used on more than 20,000 military-class vehicles, and delivers 16 in. of independent wheel travel to provide greater all-terrain performance for off-runway emergencies. In addition, the TAK-4 system provides the payload capacity needed to carry 1,000 gal. of water, 130 gal. of foam agent, and 500 lbs. of auxiliary firefighting agent. The roof and bumper turrets combined will discharge up to 750 gal. per minute.