Paint in a shade of green

Paints and coatings manufacturers are continuing to lower VOCs as well as make other environmentally friendly improvements to their products. 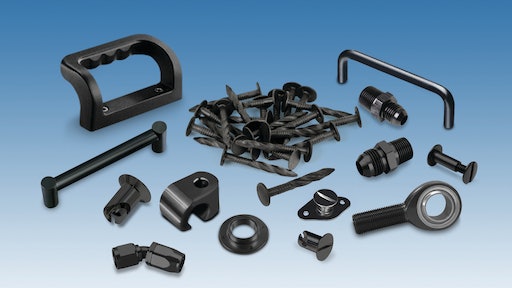 The TRU TEMP black oxide finish provides an alternative to painting that is often preferable for component manufacturers because the finish does not cause dimensional changes to the component that could inhibit it's functionality as paint would.

For several years, paint and coating manufacturers have been pushing to lower the amount of VOCs (volatile organic compounds) contained in their products, which has not been easy.

According to Andrew Hetchler, Marketing Director of Commercial Coatings for PPG Industries, Pittsburgh, PA, as VOC levels are lowered, ensuring both application and performance properties are met—such as durability and color—becomes more difficult. “Each coating has its own characteristics associated with it,” says Hetchler. “As you get lower VOCs, the application properties are less forgiving, making it easier for the paint to run or cause solvent pops.”

Hetchler says the key to developing a successful product is striking a balance between film performance, low VOCs, cost and application properties. Developing and utilizing its own proprietary resins instead of purchasing commercially available ones is one way PPG has achieved this. Creating its own resins enables the company to more closely control the chemistries of its products to meet VOC regulations as well as specific customer requirements.

To create products with low enough VOC levels, many manufacturers have turned to developing water-based paints and coatings. However, Mark Ruhland, Vice President of Birchwood Casey, Eden Prairie, MN, says these types of products don’t work well in applications with high corrosion resistance requirements because they don’t have good humidity resistance. To create low VOC rust inhibitors, Birchwood Casey reformulated its standard solvent-based product, which is inherently resistant to humidity, to use a higher grade of mineral spirit. “It has a high flash point so that it is no longer considered to be a volatile product,” says Ruhland. “Using the higher flash solvent carrier enables us to use the same inhibitors that we traditionally used, which are not volatile compounds, in order to achieve the same level of protection.”

Joseph Krebs, Director of Marketing for Commercial Segments at Sherwin-Williams Automotive Finishes, Warrensville Heights, OH, says there are a lot of misconceptions about water-based products. Many believe it to be the “greenest” solution possible because it doesn’t contain solvents. Krebs notes that water-based products still have baking and air circulation requirements, as well as waste streams, which all have environmental impacts. “And right now, many of the waterborne basecoats are 3.5 VOC.”  Meanwhile, the company offers many solvent-based products with lower VOC levels.

Helping the environment and the bottom line

While creating low VOC products has been a high priority, many manufacturers have taken the opportunity to improve their products in other ways, as well.

In early 2012, Sherwin-Williams released its Genesis HP Single-Stage topcoat, which not only contains low VOC levels (2.8 lbs. per gallon) but also eliminates the need for baking after application. Krebs says testing has shown that eliminating the baking process can decrease process times by as much as 60%.

The topcoat has also been shown to offer as much as a 90% reduction in energy consumption. Krebs says that in traditional processes, a booth is kept at 75 F until the paint has been completely applied, at which point the temperature is turned up to 140 or 160 F. With the new topcoat, the booth can be kept at 75 F and the paint will dry within 30 minutes, whereas in the past, it could take anywhere from 12 to 24 hours for a topcoat to dry if not baked.

When Sherwin-Williams developed the topcoat, it made sure not to sacrifice other customer requirements. “Some companies will try to use accelerating additives to speed up dry times,” says Krebs. “When you do that, you sacrifice appearance, making the paint look wavy or pinched.”  The company was able to eliminate the use of an accelerator additive in its topcoat while ensuring appearance and durability requirements would still be met.

The TRU TEMP black oxide finish from Birchwood Casey is a completely VOC-free process which uses sodium chemistry to create a chemical reaction with steel to form a black oxide coating on a surface. Many component manufacturers find this to be a preferable method to painting because the finish does not cause a dimensional change to the part being coated. Whereas paint can often add 1 to 4 mils of thickness, potentially affecting the part’s functionality, says Ruhland.

For facilities employing the TRU TEMP process, a lot of water can get used over the course of a month, as much as 50,000 gallons, because it is a water-based process consisting of dipping a part into a series of rinse tanks. While water generally isn’t expensive, many companies want to reduce their consumption of it in order to be better environmental citizens, or simply because they don’t have the sewer drainage capabilities necessary to handle the large amount of water used in the process. This is why Birchwood Casey developed its Near-Zero Water Recycling System.

Traditionally, fresh tap water is flowed into the rinse tanks used during the process to clear out the non-hazardous chemicals that clean the parts and create the black oxide finish. This rinse overflow is then sent down the drain as non-hazardous discharge. The Near-Zero water recycler, however, works as a semi-closed loop system in which the rinse water is sent through special filters to remove residues, particulate matter and balance the pH. After it’s reconditioned, the water is returned to the process line for use in the rinse tanks again. Since TRU TEMP relies on salt chemistries to create the finish, the amount of sodium in the water rises during the coating and reconditioning processes. Once the sodium level gets too high, all the water in the system is changed. According to Ruhland, this usually happens about once a month. “Now you’ve gone from 50,000 gallons of water in a normal process line to 500 gallons,” says Ruhland. “It’s a 99% reduction in water consumption.”

As manufacturers continue to look for ways to make their paints and coatings even more environmentally friendly, many have begun investigating the use of raw material feedstocks from renewable sources, as well as recycled materials, instead of petroleum derivatives. However, there are still many challenges associated with this, such as consistency. Because feedstocks, such as corn, differ from region to region—and season to season—there are nuances in the performance of the product. This is also the case for recycled materials. One stream of paint may have a lot of plastic from a soda bottle, while the next stream has plastic from a detergent bottle, causing differences in performance from one batch of paint to the next.

Birchwood Casey has been investigating the use of vegetable-based oils in its products. While the biodegradability of these products is good for the environment, Ruhland says it can hinder the corrosion resistance needed in certain applications due to the coating’s ability to easily decompose. “We’d like to be able to use soy or other polymers and compounds based on canola oil or other vegetable oils,” says Ruhland, “but so far they’re not stable enough to be dependable.”

The company is also looking into the use of silicone-based silanes (saturated hydrosilicons). Silicone is a cousin to carbon on the periodic table and thus forms many of the same materials as petroleum, but is safer because it doesn’t contain toxic or carcinogenic properties. Ruhland says there are already some very hard scratch-resistant coatings on the market containing silane material.

Despite its current drawbacks, Sherwin-Williams’ Krebs sees the market continuing to move towards implementing water-based products. As these become more popular, he says their performance and environmental characteristics will continue to be improved upon.

Krebs also sees smart coatings and self-healing coatings on the horizon. Able to react to an outside condition, a smart coating will change if the surface on which it is painted changes or the surrounding area changes. For example, if the amount of gas in a manufacturing facility were to reach a certain level, the smart coating would change its color, notifying personnel of the issue. Self-healing coatings, meanwhile, use heat or UV exposure to repair themselves when scratched.

“Continuing to advance chemistry and minimize hazardous components will [continue to] be the industry trend,” says PPG’s Hetchler. “There are a lot of cool things going on, but a lot of challenges.”

Andrew Hetchler of PPG Industries says electrocoating, or e-coating, is one of the lowest VOC processes available. It also offers the benefit of high material usage because the part being coated is dipped into a tank instead of sprayed, reducing the amount of waste associated with the process.

When a part is dipped into a tank, an electrical charge is placed on it and a reverse charge into the tank, causing an attraction that enables paint to be deposited onto the part. Unlike spray methods, electrocoating offers the ability to evenly coat even the most complex part. Dipping the part into a tank and using an electrical charge to attract the paint enables it to get into nooks, corners and channels that other methods often cannot reach.

Electrocoating also offers the benefit of good corrosion resistance. In the past, vehicles would begin rusting within a few years, says Hetchler. When combined with pretreatment chemicals and the improved metals now being used on vehicles, and proper maintenance, electrocoating can help a finish look good for 10 years or more.

However, Hetchler notes that there is a high initial investment in this type of process because the OEM will need to have a pretreatment system, as well as a conveyor system to move the part along the process line. There are also energy costs associated with electrocoat since it requires high heat curing to dry the paint.

Head to OEM Off-Highway.com to learn more about these, and other, paints and coatings products.

Watch a video of the TRU TEMP process in action: 10338397 (maybe this can be a circle/bubble near paragraph about)